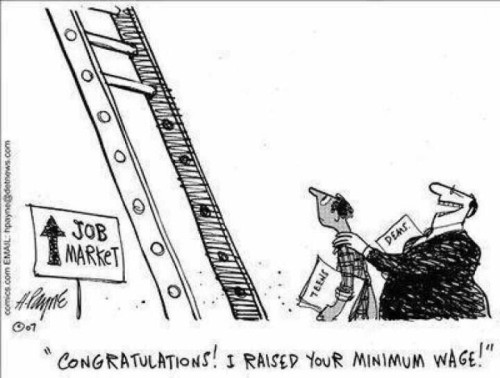 Victims of the wage floor are mostly young or unskilled

Hiking the minimum wage killed almost as many low-end jobs as did the economic collapse.

This is University of California-San Diego Professor Jeffrey Clemens’ conclusion from his just published supplement to his landmark 2014 study. He says that federal minimum wage hikes from 2006 to 2009 accounted for 43 percent of the decline in employment among young, low-skilled workers during the Great Recession.

Young, low-skilled workers — defined as individuals between 16 and 30 without a high school degree — are the most likely to be hurt by minimum wage hikes because they are the least likely to have skills that employers consider valuable. Businesses might be willing to take on these individuals at low wages in order to train them before moving them up to higher-paying work. But when the government sets a high minimum wage, that first step on the career path might disappear.

Clemens’ new study confirms this longstanding theory. Young, low-skilled workers were hit hard by the minimum wage, while most other groups were relatively unaffected.

Several strengths set the Clemens study and its predecessor (coauthored by Michael Wither) apart from a large body of research on the minimum wage. Not least among them is its time frame. The paper covers a seven-year period from 2006 to 2012, unlike other studies such as the oft-cited 1994 paper by David Card and Alan Krueger. That paper, which found no negative effect of the minimum wage, only looked at a period of eleven months.

The time frame is critical because the damaging effects of minimum wage increases are often delayed. Immediately after a wage hike, businesses usually do not wish to significantly alter their business plans. Instead of laying off workers, they might raise prices or cut back on fringe benefits. But after one or two years, fewer businesses will open, existing businesses will close faster, and fewer jobs will be available.

Clemens’ study is unique in that it separates out workers by both age and skill level, to isolate where the worst effects of the minimum wage occur. The finding that young people without a high school degree are hurt the most does not bode well for minority communities: high school graduation rates are lower for black (68 percent) and Hispanic (76 percent) students than for white (85 percent) and Asian (93 percent) students. This may be one of the reasons that the white teen unemployment rate, at 14 percent, is so much lower than the black teen unemployment rate of 24 percent.

Rather than proposing blanket increases in the minimum wage to $10 or even $15 per hour, policymakers should look for ways to ensure that vulnerable individuals are spared. One solution is to allow anyone under 25 to work for a special sub-minimum wage, thus increasing their employment opportunities while still satisfying the political need to maintain higher standard minimum wages.

The new evidence presented in Clemens’ paper is an important reminder that well-intentioned policies such as the minimum wage have costs. The minimum wage tends to benefit older, established workers at the expense of the young and the unskilled. As we move into 2016, policymakers should resolve to find more innovative solutions to poverty than the minimum wage.