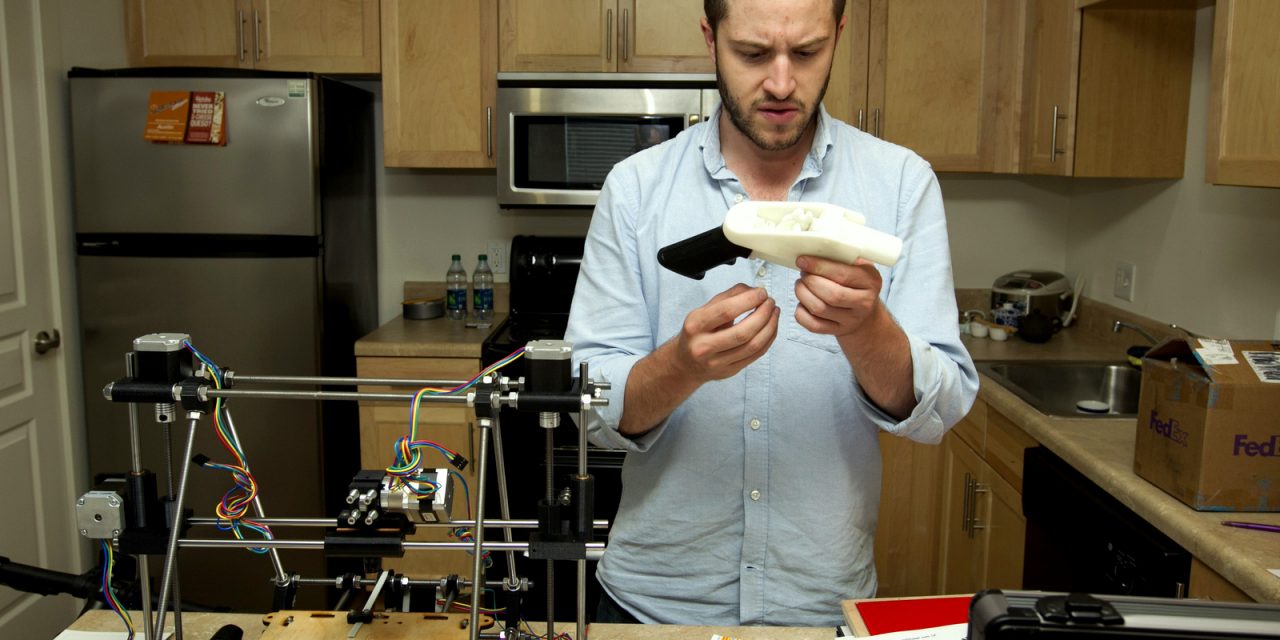 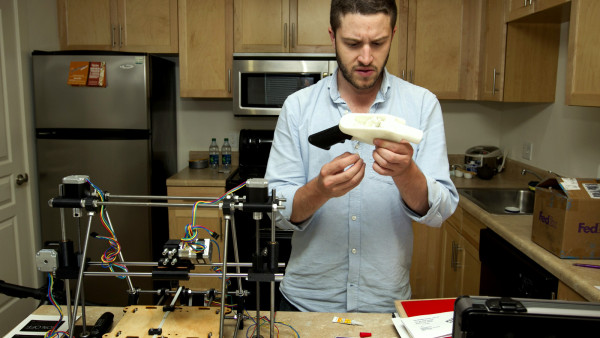 Cody Wilson works on the first completely 3D-printed handgun, The Liberator, at his home in Austin on Friday May 10, 2013. (AP Photo/Austin American Statesman, Jay Janner) AUSTIN CHRONICLE OUT, COMMUNITY IMPACT OUT, INTERNET MUST CREDIT PHOTOGRAPHER AND STATESMAN.COM

AUSTIN, Texas — As legislation struggles to keep pace with technology, the Internet is the modern Wild West. For the past two years, Defense Distributed has been embroiled in a legal showdown at the intersection of the growth of the 3-D printed weapons industry and Internet free speech.

“Let’s be honest, there are so many CAD [computer-aided design] websites online, people have been sharing their gun culture online for a long time,” Cody Wilson, director and co-founder of Defense Distributed, told MintPress News.

“Even if there was an ATF [Bureau of Alcohol, Tobacco, Firearms and Explosives] for the Internet, a regulatory agency tasked with only policing the gun culture on the Internet, you could still see how that agency could not keep up with the spread and the speed of human thought.”

The former University of Texas School of Law student has gained notoriety in the tech world for his involvement in a series of controversial digital projects, including Dark Wallet, an application to make bitcoin transactions anonymous and untraceable, and his efforts to spread firearms blueprints to the public via downloadable files. In January, Wired named Wilson one of the “most dangerous people on the Internet right now,” putting him in league with Edward Snowden, the National Security Agency and North Korean leader Kim Jong-un.

To say he’s a gun rights advocate may be an understatement. But that, mixed with an affinity for anarchist philosophy and technology, informs his “goal,” as described by Wired, “to let anyone create a lethal plastic weapon with a click anywhere in the world, and in doing so demonstrate how new technologies can render the entire notion of regulation obsolete.”

Wilson has his hands in open-source firearms plans which would allow anyone from India to Indianapolis to “print” a gun as long as he or she has access to the Internet and a 3-D printer. He’s designing programs to make cryptocurrency transactions untraceable, ungovernable and untaxable. And, through all of this, he’s found himself at the eye of a legal storm that’s perhaps less about the Second Amendment and untraceable weapons, and more about the First Amendment, digital rights and the public domain.

In 2012, Wilson founded Defense Distributed, a donor-funded, pending 501(c)(3) nonprofit corporation that designs downloadable weapons schematics that can be printed with a 3-D printer. It defines its purpose on its website:

That year, the Texas-based corporation launched a crowdfunding campaign with a goal of $20,000 to develop computer-aided designs (CAD) for a .22 caliber handgun made from plastic parts printed on an open-source 3-D printer.

They raised about $2,000 before the Wiki Weapon Project was pulled because of an Indiegogo policy against hosting fundraisers for the sale of firearms. Following the setback, Defense Distributed raised the needed funds directly through its website by accepting donations via PayPal and Bitcoin.

With the money, the team rented a Stratasys 3-D printer to carry out their designs for the Wiki Weapon Project, but less than a week after Wilson received the printer, Stratasys sent a team to Wilson’s apartment to collect it. The 3-D printing and production company’s legal counsel told Wilson:

“It is the policy of Stratasys not to knowingly allow its printers to be used for illegal purposes. Therefore, please be advised that your lease of the Stratasys uPrint SE is cancelled at this time and Stratasys is making arrangements to pick up the printer.”

Undeterred, Wilson and Defense Distributed pushed forth with plans to bring printable weapons blueprints to the Internet. In May 2013, Defense Distributed released a video of Wilson firing the world’s first fully 3-D printable firearm, the 16-piece Liberator .380 single shot pistol. They also released the 3-D printable files to the Internet. Within days the State Department demanded that the files be removed from public access, citing a violation of the International Traffic in Arms Regulations. Defense Distributed complied, though Wilson admitted to Forbes that removing all relevant data from public access “might be an impossible standard.”

“They [the government] don’t want the gun to have a legacy online,” Wilson said. “They literally have the arrogance to think that they can stop it and that they can go after one of its first big promoters in the 21st century — us — and keep us from publishing this online.”

With sales of the Liberator effectively bulldozed, Defense Distributed changed models and in October 2014 began selling a miniature computer numerical control (CNC) mill for completing receivers for the AR-15 semi-automatic rifle. The receiver is the part of the firearm that houses the operating components. Under federal law a receiver that is less than 80 percent complete is not considered a firearm and can be bought and sold freely.

With Defense Distributed’s mill, known as the Ghost Gunner, anyone with $1,200 and some basic milling knowledge can create the lower receiver of an AR-15 rifle. The term “ghost guns” was first popularized by gun control advocates because the weapons do not have a serial number and are thus untraceable. Wilson and Defense Distributed have since re-claimed the term in a sort of send-up to the U.S. government, which the company is still fighting over the alleged violations of the International Traffic in Arms Regulations.

“This whole business [Ghost Gunner] is just so we can shift all of our resources into this fight, which is a greater fight about digital production and digital distribution, the public right and the public domain,” Wilson told MintPress.

After two years of delays, Wilson and the Second Amendment Foundation brought suit against the State Department in the western district of Texas in May 2015. Defense Distributed requested an injunction that would keep the Obama administration from blocking the posting of the blueprints for the Liberator. In August, Judge Robert Pittman denied the injunction, ruling that posting the blueprints online “would fall within the definition of export.” Within weeks Defense Distributed filed a first amended claim with the court and appealed the decision with the 5th Circuit Court of Appeals.

At the circuit court, Wilson explained:

He continued, “We are just trying to get a judge, any judge, a panel of judges to say, ‘Hey, this is ridiculous, we’re going to enjoin this position and then have Defense Distributed and crew tell us why this is so terrible.’”