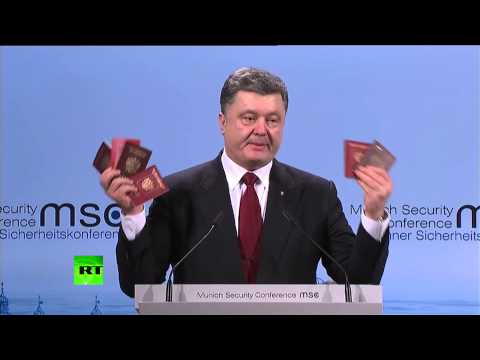 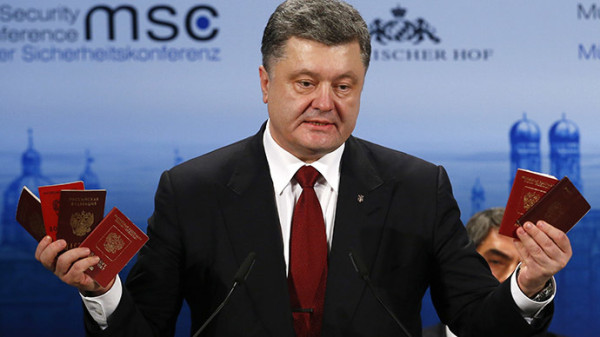 Ukraine’s President Petro Poroshenko holds Russian passports to prove the presence of Russian troops in Ukraine as he addresses during the 51st Munich Security Conference at the ‘Bayerischer Hof’ hotel in Munich February 7, 2015. (Reuters/Michael Dalder)

President Poroshenko’s PR advisers are helping him turn speeches into a kind of performance art. Sadly for the Ukrainian leader, they are more Laurel and Hardy than Laurence Olivier.

On Saturday, Poroshenko was again engaged in physical theatre, this time in Munich. Holding up Russian passports, he alleged that they belonged to Russian soldiers who had been found on Ukrainian soil. Citing “mountains of (Russian) lies and propaganda,” the Ukrainian President stood on a German stage and, well, lied.

Speaking of ‘propaganda,’ Yahoo news called the Russian (civilian) passports – which all Russians traveling abroad carry – ‘military ID’s’ which is certainly a new one.

Russian soldiers cannot use their passports while on active service – they must hand them in. Everybody who has ever lived in Russia knows this. Indeed, even contract soldiers are forced to hand in theirs while on army business and, like the troops, they get a replacement military ID. This is why Sochi’s bars are crawling with off-duty Russian military – they can’t go abroad without their travel documents.

However, many Russian civilians who are army reservists (much like the US National Guard) would have both passports and military ID’s. Theoretically, Russian reservists – who are not employed by the Kremlin – could act as volunteers in Ukraine…in much the same way that mercenaries from as far-flung areas such as Spain, Poland, Croatia and Canada have been documented as serving in the Ukrainian civil war.