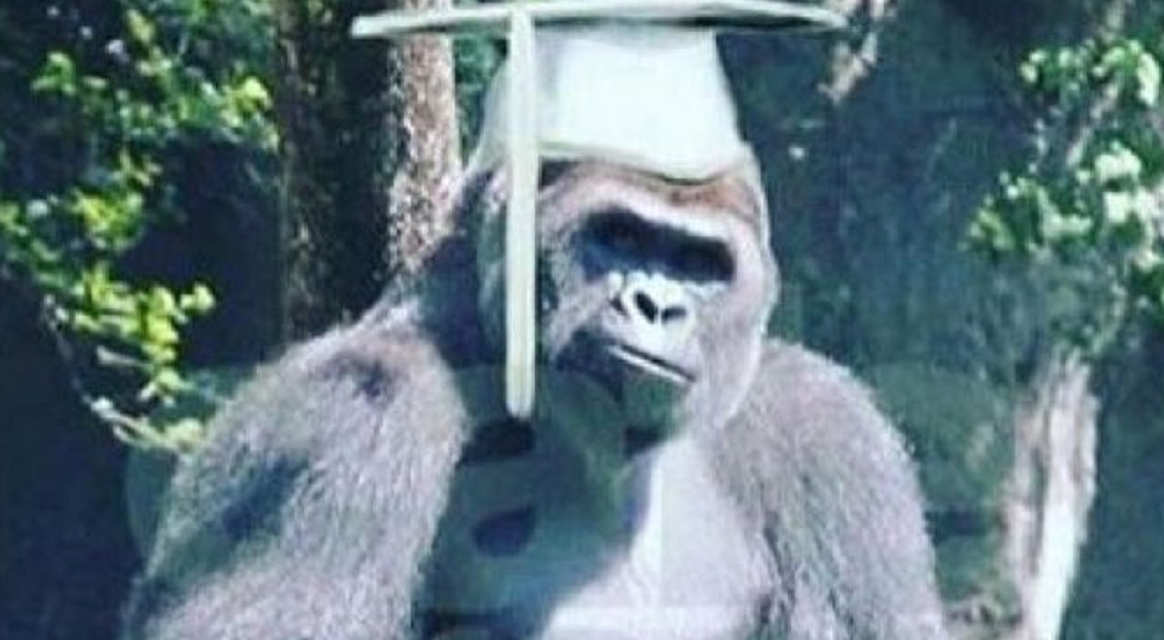 Students attending the University of Massachusetts Amherst have been warned that not only are Harambe jokes “racist” and “micro-aggressions,”  but they also might be a Title IX violation if used on campus.

Harambe was a western lowland gorilla that was shot and killed at the Cincinnati Zoo in May, after a child’s parents failed to supervise their toddler and he fell into the glorious creature’s enclosure. Since the tragedy, Harambe has managed to become an internet legend who has even tied in the presidential race with Green Party candidate Jill Stein in Texas.

#Hermine is cool, but they spelt the name wrong, so I'm all for #Harambe pic.twitter.com/lF0joKsldV

Harambe’s legacy doesn’t seem to matter to two resident assistants at the university who sent out a lengthy email to all first year students.

“We understand that social media has been popularizing Harambe in some crude ways, which may appear to be funny to groups of people. However, these comments are not only derogatory, but also micro-aggressions to some UMass students,” RA’s Colleen and Ryan wrote.

The RA’s explained that there is a “defined residential community” (which sounds an awful lot like segregation) where students “sharing similar heritages, ethnicities, and/or other identities are able to live together,” and the one focusing on African-American heritage happens to be named Harambe, a Swahili word for “the point where people pull together.”

“Any negative remarks regarding ‘Harambe’ will be seen as a direct attack to our campus’s African American community. Please be careful what gets written on your whiteboards, as well as what gets written on them. If you are not the one writing these remarks, please let us or the RA on duty know.”

They further went on to indirectly reference the popular phrase “dicks out for Harambe,” and warn that it could be reported as a Title IX incident — implying that it would be considered sexual harassment.

“To be very clear: using… phrases/hashtags which encourage the exposition of body parts runs the risk of being reported as a Title IX incident. These are sexual assault incidences that not only get reported to Community Standards, but also to the Dean of Students. Needless to say, it is a very serious incident—especially for a first year student!”

Good luck Colleen and Ryan, but it is safe to assume that you will continue to be triggered — considering how the Cincinnati Zoo’s own plea to stop the memes went.

The Twitter account belonging to zoo director Thane Maynard was hacked last month and was quickly morphed into a shrine to Harambe. This included replacing Maynard’s photo with one of the beloved gorilla and sending out several tweets with the popular hashtags “#DicksOutForHarambe” and “#JusticeForHarambe.”

Following the incident, Maynard stated that the jokes are very upsetting because the “zoo family is still healing” from the loss.

“We are not amused by the memes, petitions and signs about Harambe,” Maynard told the Associated Press. “Our zoo family is still healing, and the constant mention of Harambe makes moving forward more difficult for us. We are honoring Harambe by redoubling our gorilla conservation efforts and encouraging others to join us.”

The memes have not stopped, and it should probably be expected that the effort at UMass to squash free speech will go just as well.