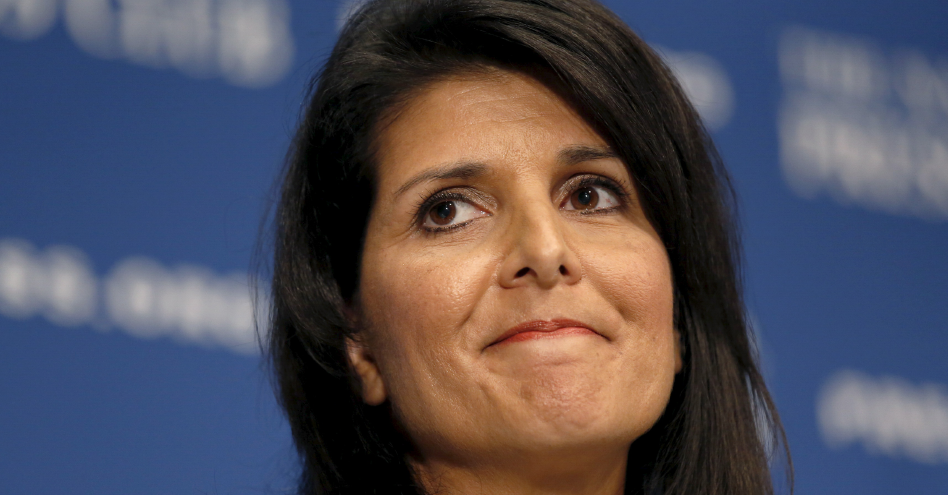 Nikki Haley is a U.S. ambassador to the United Nations who has recently appeared on CNN to express the latest Syria policy. When asked by the reporter if regime change was the priority, this is what she said:

“So, there’s multiple priorities. Getting Assad out is not the only priority. So what we’re trying to do is… obviously defeat ISIS. Secondly, we don’t see a peaceful Syria with Assad in there. Thirdly, get the Iranian influence out, and then finally move towards a political solution because at the end of the day this is a complicated solution there are no easy answers, and political solution is going to have to happen, but we know… there’s not any sort of option where a political solution is going to happen with Assad at the head of the regime… If you look at his actions, if you look at the situation it’s going to hard to see a government that’s peaceful and stable with Assad.”

The CNN reporter followed up by clarifying if regime change is the policy, she states

“Regime change is something that we think is going to happen… This isn’t about policy or not this is about thoughts. So when you look at the thoughts, there is no political solution, that any of us can see with Assad at the lead… I don’t think that’s something for the United States to decide… that’s something that the entire international community has decided, that it’s going to be hard for us to see Assad in that leadership role.”

As we can see, Haley claims that the “entire international community” has decided in favor of regime change. However, if we back up a couple days and watch the UNSC emergency meeting following the U.S. airstrikes that many countries, most importantly, Russia, do not believe this to be the case.

Egypt supports a cease-fire, and recently condemned the “competition” between the UN security council, furthermore asserting that the Syrian people should be in charge of their people. Bolivia also argued that the United States could very well be deceiving the world about what’s going on, using a picture of Collin Powell as a prop to argue their point.

Other countries also asserted that an investigation is needed before action is taken. In short, the “entire international community” is not quite sure regime change is the policy. To hear each of the UNSC countries’ policies, check out the video below.

Since the United States’ airstrike on Syria on April 6th, there has been an uproar from other actors in this international dilemma. Multiple countries have made military moves,  and it seems that a political solution is being outweighed by the threat of force.

There is also reports of a McMaster-Petraeus plan being developed to put 150,000 troops in Syria. If this were to happen, a political solution will only happen after a military solution.

[RELATED: Petraeus Working Behind Scenes With McMaster To Put 150,000 Troops in Syria]