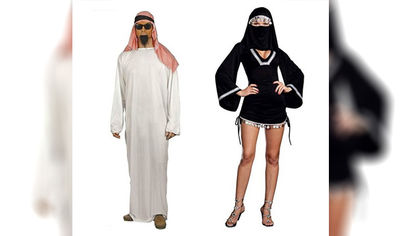 Anger over Halloween costumes has become as closely associated with the holiday as trick-or-treating, and this year is no exception. Continuing the infantilization of college students, the University of Florida is now offering their students round the clock counseling incase they get offended over any costumes.

The Saudi and the Sexy Burka costumes which have been making headlines this year.

In a Halloween focused blog entry posted to the university’s website on Monday, they remind students that being offensive is simply not acceptable.

“If you choose to participate in Halloween activities, we encourage you to think about your choices of costumes and themes. Some Halloween costumes reinforce stereotypes of particular races, genders, cultures, or religions. Regardless of intent, these costumes can perpetuate negative stereotypes, causing harm and offense to groups of people,” the blog entry began.

The school then asserts that they will have a counselor present on the campus at all times, to wipe the tears of any sad young adults who are triggered by the day of playing dress up.

“If you are troubled by an incident that does occur, please know that there are many resources available. Please take advantage of the 7 day a week presence of the U Matter, We Care program at the University of Florida by emailing umatter@ufl.edu. Additionally, there is a 24/7 counselor in the Counseling and Wellness Center available to speak by phone at 352-392-1575,” they urge their adult students.

Not just stopping there, they also remind their students to report any incident of “bias,” and tattle on their peers like children.

“Lastly, the Bias Education and Response Team at the University of Florida is able to respond to any reported incidents of bias, to educate those that were involved, and to provide support by connecting those that were impacted to the appropriate services and resources. You may submit a bias incident report at www.umatter.ufl.edu/stopbias,” the statement continues.

Instead of teaching these students to cope and function in a society that is not always polite, they are enabling the war on the freedom of speech and expression to continue to grow. How are these young adults expected to function in society once nobody is there to protect them from experiencing negative feelings or disagreements?

Earlier this month, the University of Wisconsin-LaCrosse held an event titled “Is Your Costume Racist?” pandering to the outrage culture that is sweeping campuses across the nation.

“These are things we have identified as getting students into trouble before, whether with the institution or socially,” the host Dr. Richard M. Breaux, an assistant professor in the Ethnic and Racial Studies Department, told We Are Change, acknowledging that often times the students mean no harm with their costume choices. “Students can quickly and unintentionally have to defend a costume choice they made which can impact their future employment, or even have them kicked out of school.”

An organization called “Do Something” has even launched a campaign called “1-Star for Hate,” taking aim at online retailers that upset their delicate sensibilities. To get people to submit fake bad reviews for costumes they do not own, the group is offering $1,500 scholarship prizes for people who repeatedly copy and paste poor reviews in the comment sections of costumes the organization deems offensive. The more fake reviews that you post, the greater your odds are of winning!

Last year the organization focused on a Caitlyn Jenner costume that was being sold by Halloween retailers. This year they have their sights set on Native American, Saudi, and Dia de los Muertos themed offerings.

As I previously wrote for Sputnik News, Halloween is a holiday in which people normally dress as serial-killing clowns, human blood-slurping vampires, and murdered celebrities, and no one blinks an eye. But apparently cultural appropriation, on a day all about being able to dress up as something you are not, is just going too far.

Perhaps all the freedom-minded students should turn this around and report any students they see dressed up as Hillary Clinton, I would.