US tracked Wikileaks Web traffic and encouraged action against its founder: NSA leak

US spy agency, the NSA, and its British equivalent, the GCHQ, deployed Internet surveillance technologies against Wikileaks in a campaign that also encouraged international governments to take action against the website’s founder, according to newly leaked documents from NSA whistleblower Edward Snowden.

The information is reported by The Intercept — the newly launched website headed by ex-Guardian journalist Glenn Greenwald — and suggests that a range of tactics were used to monitor Internet traffic to Wikileaks. Operatives reportedly tapped into fiber optics cables and other parts of the ‘backbone’ of the Internet in order to collect the IP addresses of visitors to Wikileaks, details of search terms used to find the site, and more.Documents from the NSA show that Wikileaks, which rose to prominence by publishing leaked government documents, was labelled a “malicious foreign actor.”

A screengrab taken from Anticrisis Girl, a surveillance system used by the NSA, shows data captured from the Wikileaks website: 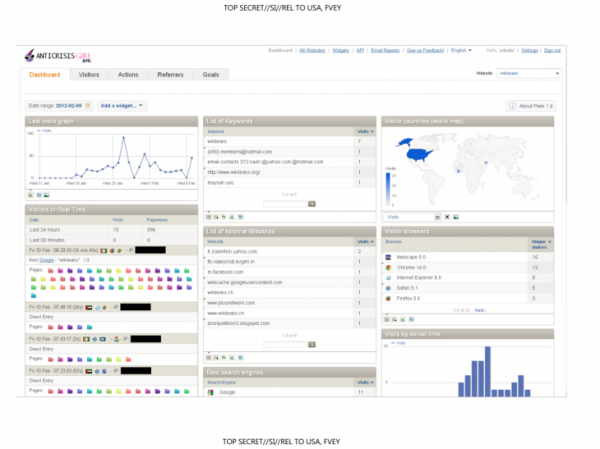 A data collection initiative like this would have almost certainly swept up information from Internet users across the US and the rest of the world. The US administration has always maintained that it doesn’t track US citizens, but this new leak raises serious concerns about whether Wikileaks donors, supporters or even those who simply read the site once became legitimate NSA targets, as The Intercept notes:

In short, labeling WikiLeaks a “malicious foreign target” would mean that anyone communicating with the organization for any reason – including American citizens – could have their communications subjected to government surveillance.

Aside from surveillance, the leaks also suggest that the US government urged foreign regimes involved in the Afghanistan conflict to file charges against Wikileaks founder Julian Assange. Wikileaks has been a vocal critic of the war efforts in the country, and published leaked war logs.

A statement from Assange within a Wikileaks press release criticized the “reckless and unlawful behavior” of the NSA, and called on President Obama to investigate the allegations. The organization also showed its funny side by releasing a cartoon in response to the information contained within the leaked documents: 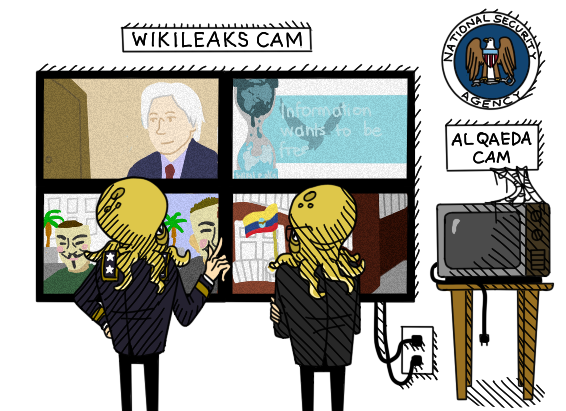