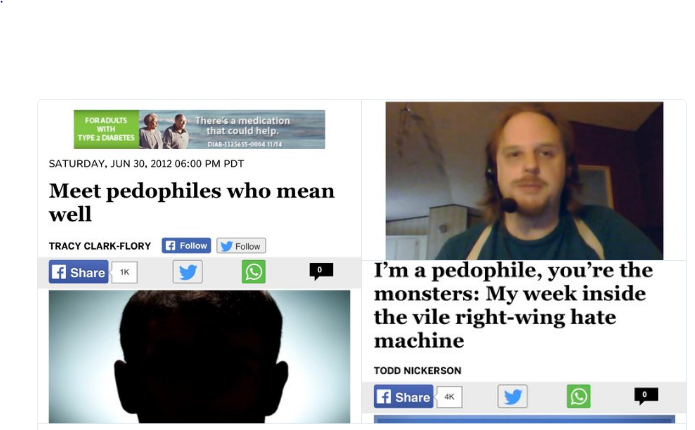 Author and documentary filmmaker Mike Cernovich took to Twitter yesterday and waged war against Salon.com – exposing their disgusting protection and promotion of pedophilia.

A topic on Salon.com is literally titled “virtuous pedophiles.”

What are the people at Salon.com thinking?! “Virtuous Pedophiles”? I am not sure what the hell is virtuous about pedophiles, but let’s try to wade through this dark subject with a light heart.

Honestly, this topic is so sickening it makes me want to find Salon’s editors and the writers of these disgusting articles and strap them down to a chair Clockwork Orange style and show them the heart wrenching stuff I found hunting pedophiles. I helped run the @ReportAPedo account on twitter before we got suspended, and from my experience I got to see things that to this day I can’t get out of my head that makes me sick to my stomach. Salon you really want to tell me you think pedophilia should be normalized and there are actually “Pedophiles Who Mean Well?”

When you advocate no-platforming, as mainstream media does, it's rational to conclude giving a platform to pedophiles is an endorsement. pic.twitter.com/YEGtbXwdt2

Let me tell you how much pedophiles mean well. I infiltrated into large pedophile communities on the dark web and clear web as we hacked into various email accounts, exposing pedophiles and online pedophile rings on Tor – sick, demented horrible people. Some of these pedophiles were taking pictures of their own kids and sharing it online with other pedophiles. Salon’s headline “I am a Pedophile but not a monster” is normalizing absolute monsters. Anyone who tries to make sexual advancements on children or gets sexually aroused by children is by definition monstrous.

.@oliverdarcy You support this? I sure don't. Why is Salon a platform for pedophiles? pic.twitter.com/MajLh5ykfG

In another case we exposed a pedophile in Argentina who was also a priest! He was trying to arrange a meeting with someone who said “they had access to children.” Now to kill the stigma that every priest is a pedophile, we found that surprisingly pedophiles were literally all over in various establishments and institutions and more commonly it was someone close to that child like a parent or a relative.

Mike Cernovich has the right idea – screencapping pictures of companies advertising with Salon.com and asking those companies why they support pedophilia is the right way to bring justice to Salon’s disgusting pro-pedophile campaign.

Reading Salon’s headlines is frankly disturbing, let alone knowing that you have a section entitled “virtuous pedophiles.” As Cernovich said, you are “giving a platform to pedophiles and that is an endorsement.” Why is Salon trying to normalize pedophilia? Are they trying to shift the Overton window for pedophile politicians like Patricia Hewitt did in the U.K.? Hewitt, the former Labour cabinet minister, was caught trying to push a pedophile’s agenda to make incest legal and lower the age of consent to the age of 10, as we detailed in our groundbreaking expose on “elite” pedophilia. An entire ring of “elite” pedophiles exists – is Salon their public relations outlet?

There is nothing, I repeat nothing “virtuous” about pedophiles who want to rape and molest children and in many cases hurt or kill children. There is no virtue in pedophiles who look at random kids on the internet and get off on it. Then there are those that steal children off the streets, kidnapping them from their parents.

Pedophilia sadly is an epidemic globally – it’s the devolution of our society. One website we were hunting on of clothed children or non nudes had a total of 500,000 accounts – and that was on the clear web or www, and not onion Tor addresses. We would also take cases from law enforcement who sent us tons of pedophiles and encouraged us to look into them and watch them. Salon why don’t you spend a day on the anti-trafficking unit or online on the dark web and see pedophilia for what it really is – horrifying and disturbing child abuse.

Again, the “elite” child abuse scandals have been documented for decades, and frankly I am disgusted by the mainstream media for making it into a joke and wild conspiracy theory about tunnels under DC and focusing solely on that theory. Quite simply, FOCUS ON THE REAL EVIDENCE like the declassified FBI pedophile symbols and then tell me how places like Comet Ping Pong Pizza were not possible pedophile meeting places or places to network given their symbols for pedophiles? How about mentioning Jeffrey Epstein and his light sentence for child trafficking and Dyncorp’s constant trafficking of kids for decades, or the DuPont heir Robert Richards who raped his own three year old daughter and got no jail time? No, instead the mainstream media wants to whitewash a serious subject that deserves critical attention and investigation why? Because as John Decamp said “if you control the media, if you control the Justice Department if you control the police you own the system.” Are the two from a New Jersey halal slaughterhouse charged for human trafficking involved in selling child sex slaves? With the amount of cover pedophiles have been given by the law, its difficult to determine which of the many human traffickers in the U.S. are selling children to pedophiles.

Anyone who doubts elite pedophilia can watch “An Open Secret” and see the pedophilia in Hollywood that is “normal” in their own words. See the child talent agent Marty Weiss, who is a convicted pedophile now working as the person who oversees these talent agencies and is supposed to protect the children. Listen to Corey Feldman talk about how he and Corey Haim were raped. Find the charges of pedophilia against X-Men director Bryan Singer.

Mike Cernovich’s screen capping all of Salon’s disgusting pro-pedophilia articles and asking people to call and write their advertisers and investors to let them know they are supporting a site that supports pedophilia – or at the very least gives pedophiles an outlet to express why they aren’t evil and they are the victims here – is courageous and much needed.

Salon published pro-pedophile articles, it is platform for pedophiles. Time to write "investors." Why do they fund a money-losing "company"?

In a statement given to We Are Change, Mike Cernovich had this to say – “Pedophilia is not investigated properly as many in the media are pedophiles. Salon itself has attempted to normalize pedophilia. So too has the New York Times. Citizens must unite against evil in the world.”

I couldn’t agree more. The world won’t be silent anymore. 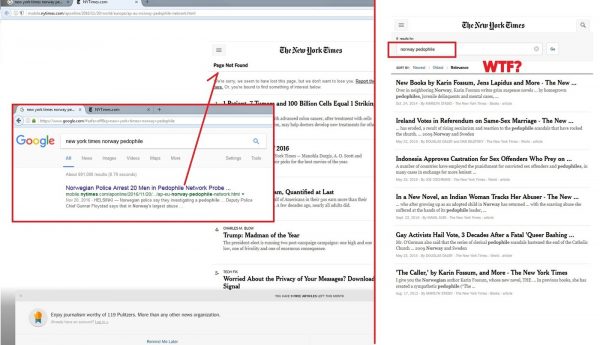