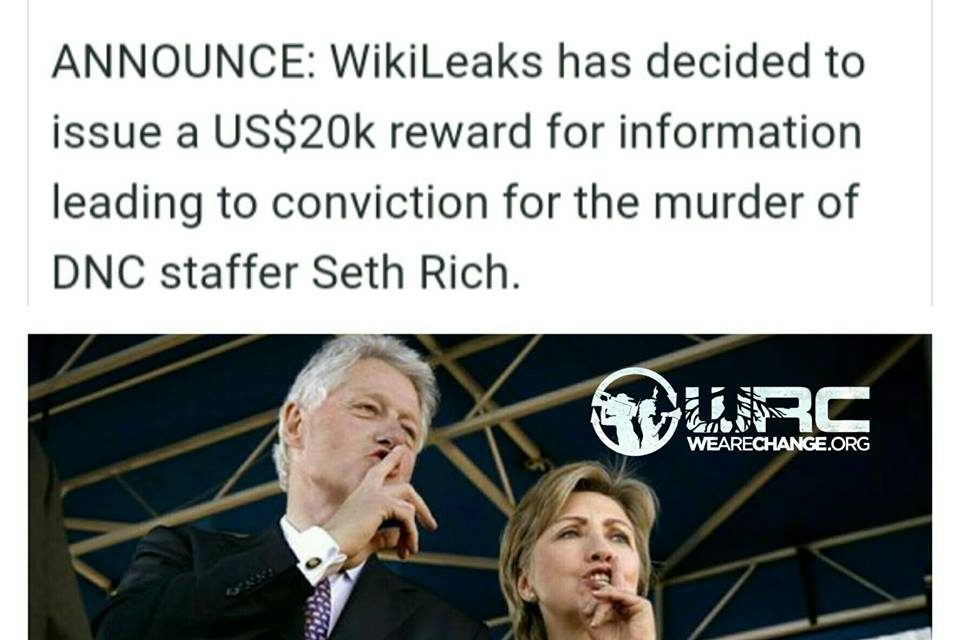 WikiLeaks has offered a $20,000 reward for anyone with information that will lead to the arrest and conviction of murdered DNC data analyst Seth Rich.

Due to the timing and mysterious circumstances in the case, rumors have swirled since his death that he was the person responsible for the massive DNC leak which lead to many in the party stepping down — including the controversial chairwoman Debbie Wasserman-Schultz. There has been no evidence to corroborate the speculation.

Rich was however, previously employed at a data firm that had worked with the Clintons.

Wikileaks announced their reward offering Tuesday morning on Twitter, and were instantly inundated with responses demanding that Rich’s death was related to Democratic candidate Hillary Clinton.

Rich, 27, was shot to death outside his home in an affluent Washington, DC, neighborhood on July 10. He was beaten and shot in the back multiple times while on the phone with his girlfriend. Police immediately speculated that his death was part of a botched robbery — but his family has contended that his cellphone, wallet, and watch were found on his body.

The Metropolitan Police Department has also offered a reward of $25,000 — but have not yet found a suspect.

Last week, Rich’s mother Mary made a desperate plea for anyone with information to come forward.

“We want to find out who killed our son,” she said during a highly emotional press conference.

Wikileaks publisher, Julian Assange, has previously suggested that the DNC leak may have been the work of someone on the inside.

The theories surrounding Rich’s death gained even more momentum after another man connected to the DNC was found dead on August 2.

Shawn Lucas was the person who live streamed the service of process of the fraud case against the DNC that was filed by supporters of Senator Bernie Sanders. He was found dead on his bathroom floor, despite being in good health.

Other recent deaths surrounding Clinton include Joe Montano — an aide to Vice Presidential nominee Tim Kaine who died from a heart attack in late July, John Ashe — the former President of the UN General Assembly who is rumored to have been scheduled to testify against Clinton when his windpipe was crushed by a barbell, and Victor Thorne — an investigative journalist whose latest project was a book of Clinton opposition research.

While there is currently nothing linking these deaths, it sure is a lot of coincidence.