Another One Bites The Dust: Russian MP Denis Voronenkov Shot In Ukraine 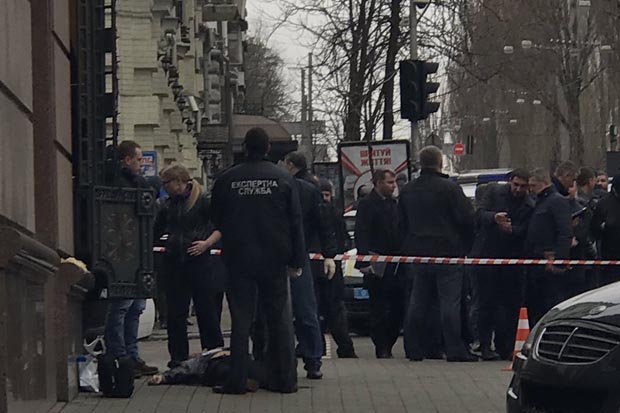 Another one bites the dust as Russian MP Denis Voronenkov was assassinated in broad daylight in the middle of a busy street in Ukraine.

Voronenkov and his security guard were reportedly attacked by an unidentified gunman at the entrance of an upmarket Premier Palace hotel in the Ukrainian capital Kiev, The Telegraph reported.

Voronenkov was “Shot three times in the head and neck as he walked along the road in Kiev,” Kiev’s police chief, Andriy Grishchenko said.
The assassin was injured by Voronenkov’s security guard, was captured, and then died hours later according to police.
“The killer is under protection, he is given priority medical assistance,” Grishchenko said. The bodyguard was rushed to the hospital and his condition is unknown.
Shocking pictures purport to show the dead man bleeding out as members of the public walked by his body.
Voronenkov, 45, was an ex-member of the Russian parliament who previously criticized Russian President Vladimir Putin, before fleeing to Ukraine last Autumn. He left with his wife Maria Maksakova, another Russian official after fearing for his life. The MP complained that he was being persecuted by Russian security agencies and also denounced his citizenship to the country.
Ukraine’s president, Petro Poroshenko, fingered Russian authorities as being responsible, calling the killing an act of “state terrorism”.
Poroshenko’s released statement said that Voronenkov was one of the “main witnesses of the Russian aggression against Ukraine and, in particular, the role of Yanukovych regarding the deployment of Russian troops to Ukraine”.
“Voronenkov was one of the main witnesses of Russian aggression against Ukraine and, in particular, the role of former Ukrainian president Viktor Yanukovych regarding the deployment of Russian troops to Ukraine,” Poroshenko said.
Anton Herashchenko, an adviser to the Ukrainian Interior Ministry, said, “It is an ordered political murder, made for the purpose of intimidating all those Russian deputies and officials who try to escape from Russia to the West or to Ukraine.” The goal was to gag people like him who try to “tell the truth about how the punitive Russian apparatus works.”He added: “He was killed in retaliation for the fact that he and his wife gave truthful testimony about how the annexation of the Crimea and the attack on the Donbass was prepared.”Voronenkov was reportedly set to meet Ilya Ponomarev, another exiled ex-Russian MP.

Ponomarev wrote on Facebook that Voronenkov was “an investigator who was deadly dangerous for the Russian security agencies”, according to a translation from The Moscow Times.

Yuri Lutsenko Ukraine’s prosecutor general writing on Facebook said that it was “typical public Kremlin punishment of a witness,” adding that Voronenkov had been due to speak to military prosecutors on Thursday, The Guardian reported.

Voronenkov testified as a witness in a treason case against Viktor Yanukovych, the Moscow-backed former president who was ousted in the maidan coup.

The Kremlin has released a statement denying any involvement, calling the accusations “absurd”.

“We believe that all the falsehoods that can already be heard about much-hyped Russian involvement are absurd,” said Dmitry Peskov, Vladimir Putin’s spokesman.

Russian Foreign Ministry spokeswoman Maria Zakharova went further, stating that the “killer regime” in Kiev “will do its best to make sure that no one will ever know the truth about what happened”.

This comes as Russia’s space agency Roscosmos’ Vladimir Evdokimov was mysteriously found stabbed to death in his prison cell on Monday.

Voronenkov’s death brings the total of dead Russian officials in the past six months to eight, six of which occurred in a period of 60 days.

Is Russia killing their own officials or is the U.S. deep state murdering them in a silent war?