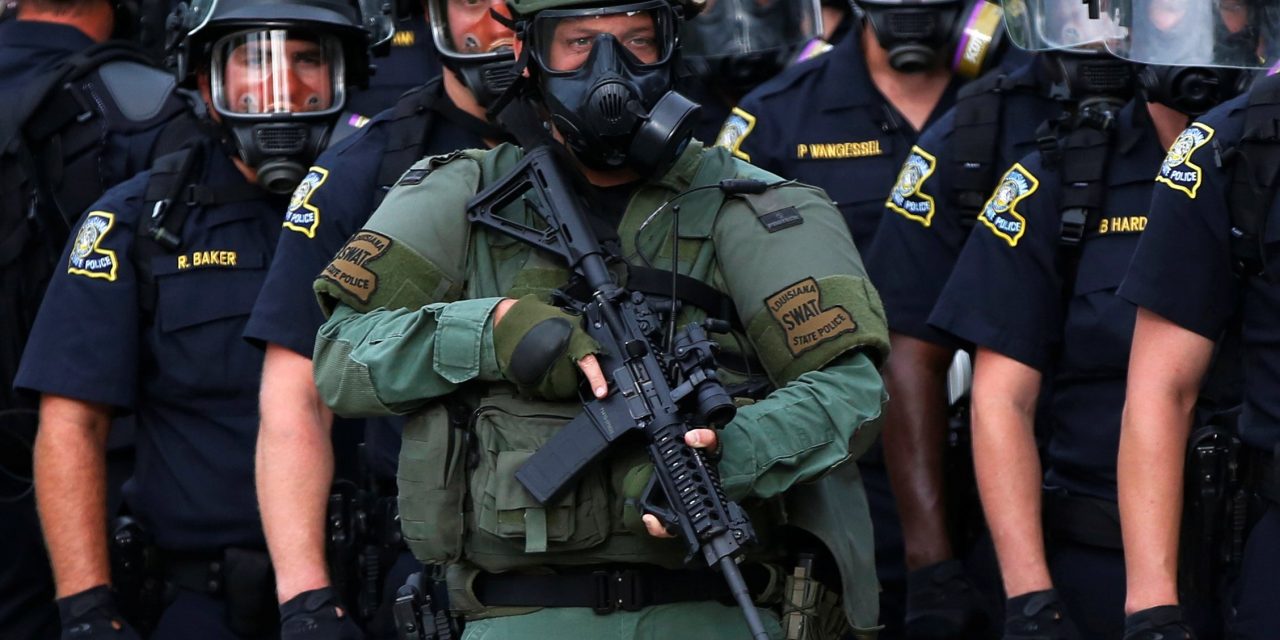 THE BATON ROUGE Police Department and state law enforcement officials were sued in federal court on Wednesday for violating the First Amendment rights of dozens of protesters detained at demonstrations in the city last weekend.

The suit, which asks for a restraining order to prohibit officers from arresting or intimidating protesters rallying to express their anger at the killing of Alton Sterling, was filed by a coalition of rights groups, including the American Civil Liberties Union and the National Lawyers Guild.

The lawyers note that a litany of violations can be seen in video recorded by protesters and journalists as more than 180 arrests were made over the weekend by heavily armed police officers, including:

a. Excluding lawful protestors from public forum space, including sidewalks, neutral ground, and public property;
b. Engaging with peaceful protestors in a militarized fashion, including full body gear, threatening the use of chemical agents, and keeping live automatic weapons trained on peaceful crowds;
c. Arresting protestors for “obstruction” of a highway in the absence of any impact on traffic or vehicle safety;
d. Giving contradictory and confusing ad hoc orders to protestors, then arresting individuals for noncompliance;
e. Arresting legal observers and members of the press without probable cause;

Images of officers dressed for battle confronting and arresting peaceful protesters in Baton Rouge provoked sharp reactions on social networks over the weekend.

More video has come to light in the days since, along with firsthand accounts from protesters and journalists who were detained.

Imani told The Intercept in a telephone interview that she and Muhammad took part in a protest at the State Capitol building in downtown Baton Rouge on Sunday. “Afterward, people felt energized, so we wanted to march,” she said. As video recorded by Muhammad shows, several hundred protesters were then blocked from continuing through a residential neighborhood by a large number of police officers in body armor, many wearing gas masks and toting automatic weapons.

State Police Superintendent Mike Edmonson later described the second part of the protest as separate from the rally at the Capitol, but Imani disputed that on Twitter, pointing to images of herself, in a red jacket emblazoned with the words “Stay Woke” and a white hijab, at both locations, and Muhammad holding up a sign with the number to call at the National Lawyers Guild in case of arrest.

This footage on YouTube begins with the police driving an armored vehicle with a blaring siren directly at the protesters, and ends with advising protesters who did not want to disperse but had largely cleared the streets that

A resident of the area invited protesters onto her property, hoping to shield them from arrest.

That effort, in the end, proved fruitless, as officers stormed the woman’s yard and roughly arrested protesters.

a protester arrested wit us ?? ran on the grass beat him he was nt resisting arrest fractured his eyesocket @deray pic.twitter.com/DbesjzKDVG

The lawsuit against the Baton Rouge police filed on behalf of the protesters was not the only one related to the killing of Alton Sterling last week to go forward. The owner of the local Triple S Food Mart, Abdullah Muflahi, who witnessed the fatal shooting of Sterling by an officer, is seeking compensation for having been detained in a locked police car for four hours and the confiscation of his surveillance camera footage by the police.

Article obtained through the theintercept.com all rights reserved.