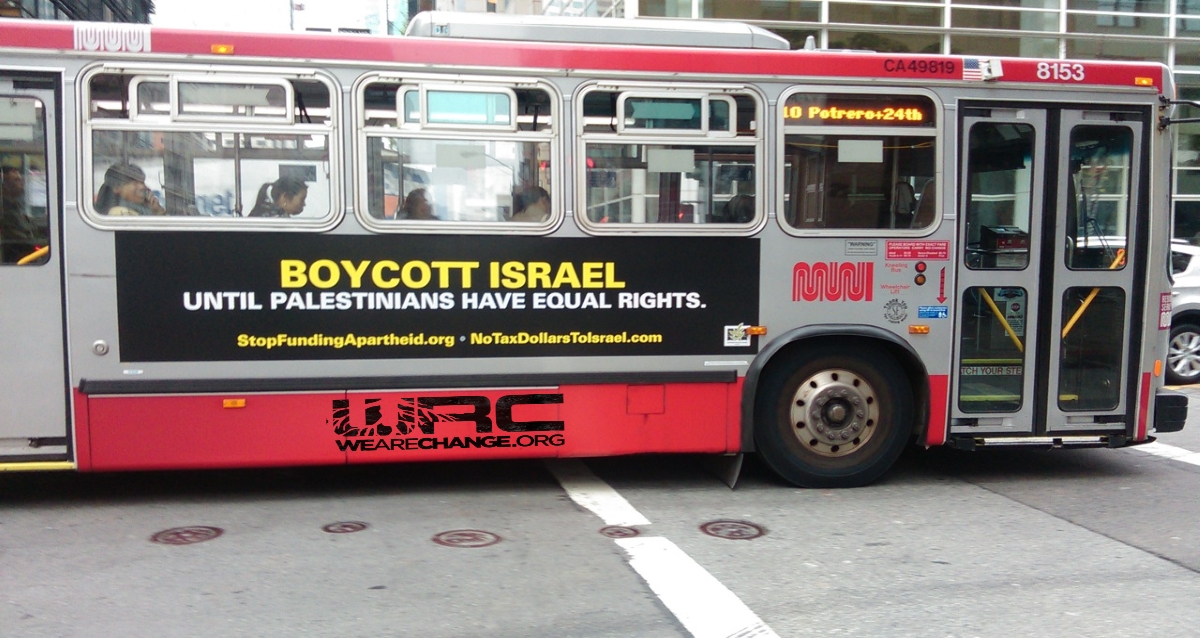 Dave Gahary interviews Ed Mast, the spokesperson for the Seattle Mideast Awareness Campaign, who discusses the organization’s creative displays to increase public awareness of U.S. taxpayer complicity in Israel’s denial of Palestinian rights, the faceless opposition from pro-Israel elements and the lawsuit they are waging with the help of the Washington state branch of the ACLU.

Thanks to, Seattle’s Mideast Awareness Campaign.

On August 9, Seattle Mideast Awareness Campaign (SeaMAC) launched a new ad on buses in San Francisco with the slogan Boycott Israel Until Palestinians Have Equal Rights. The bus ad will run for four weeks.

SeaMAC’s new bus ad also includes the slogan Stop Anti-Boycott Legislation and features a list of previous social justice boycotts, including boycotts against British tea in 1773, segregated buses in Montgomery in 1956, and South African apartheid from 1959 to 1994.

“Advocates for Israel’s apartheid are trying to persuade state and national legislatures to outlaw the right to boycott against social injustice in Israel,” said Edward Mast, volunteer board member of SeaMAC. “This attack on free speech is one more example of demanding special treatment for the State of Israel.”

Bills and resolutions attempting to outlaw the movement for Boycott, Divestment and Sanctions (BDS) against Israel have been introduced or passed in at least 21 state legislatures and the U.S. Congress. New York Governor Mario Cuomo recently issued an executive order to create a blacklist of institutions or businesses that “engage in or promote” BDS.  The American Civil Liberties Union (ACLU), the Center for Constitutional Rights and other civil liberties organizations are disputing the legality of these bills, resolutions and executive actions.

“The Boycott, Divestment and Sanctions (BDS) movement is gaining momentum,” said Carla Curio, another volunteer board member of SeaMAC.  “The government of Israel is frightened enough to spend millions of dollars on false and defamatory PR and propaganda, desperately trying to bully people away from taking citizen action against Israel’s apartheid and ongoing war crimes.”

Although SeaMAC ran the main slogan of this campaign, Boycott Israel Until Palestinians Have Equal Rights, on buses in Washington, D.C. and three other cities in 2015, the same ad was censored and taken off a billboard in Chicago by Lamar Inc. in early 2016. SeaMAC has also been prevented from running several bus ads critical of Israel in Seattle, even though pro-Israel groups have been allowed to run false, misleading and inflammatory ads on those same King County Metro buses.

SeaMAC’s ad uses the term “apartheid” to refer not only to the West Bank, where Israeli Jewish settlers and Palestinian residents, both under the jurisdiction of the Israeli government, live under two separate and unequal sets of laws; but also to the stark inequalities inside Israel itself, where 1.5 million Palestinian citizens are subject to over 50 laws that discriminate against them and in favor of Israeli Jews.   The call to boycott Israel is modeled on the boycott campaign against apartheid in old South Africa.

Seattle Mideast Awareness Campaign (SeaMAC) is an all-volunteer organization using direct education through public forums, church presentations, school presentations, and other face to face presentations to discuss how U.S. support for Israel enables Israel’s continued oppression and subjugation of the Palestinian people. SeaMAC is incorporated as a non-profit corporation in Washington State and as a 501(c)(3) organization under Federal tax code.