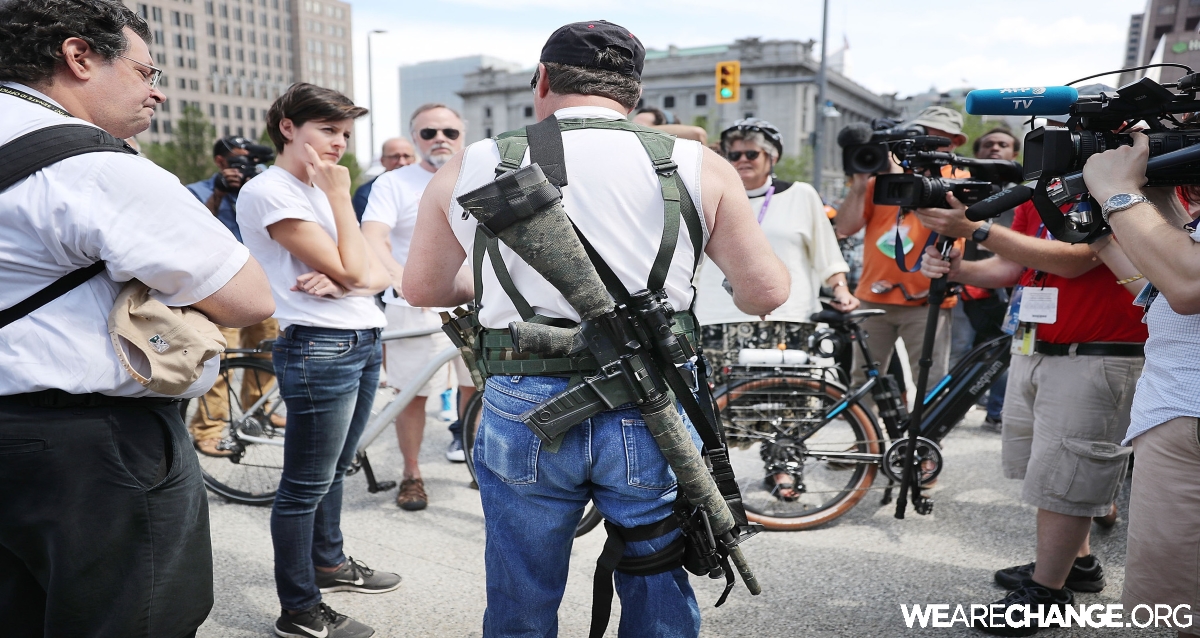 “We are sending a letter to Gov. Kasich requesting assistance from him. He could very easily do some kind of executive order or something — I don’t care if it’s constitutional or not at this point,” Stephen Loomis, president of Cleveland Police Patrolmen’s Association, told CNN. “They can fight about it after the RNC or they can lift it after the RNC, but I want him to absolutely outlaw open-carry in Cuyahoga County until this RNC is over.”

State law in Ohio allows for licensed firearm owners to wear their weapons in public. With the exception of a small “secure zone” inside and around the Quicken Loans Arena, residents, delegates and protesters are legally permitted to walk around the city — including within its 1.7 square mile regulated “event zone” — with any firearm not explicitly banned by the state.

Kasich, responding to the request, said: “Ohio governors do not have the power to arbitrarily suspend federal and state constitutional rights or state laws as suggested.”

Earlier, he released a video offering his condolences in the wake of the Baton Rouge attack.

Loomis also said officers here would begin ramping up inspections and oversight over anyone who is holstering a weapon entering the downtown area, where the Republican convention is scheduled to begin on Monday.

“We are going to be looking very, very hard at anyone who has an open carry,” he said. “An AR-15, a shotgun, multiple handguns. It’s irresponsible of those folks — especially right now — to be coming downtown with open carry AR’s or anything else. I couldn’t care less if it’s legal or not. We are constitutional law enforcement, we love the Constitution, support it and defend it, but you can’t go into a crowded theater and scream fire. And that’s exactly what they’re doing by bringing those guns down there.”

The first key test for law enforcement comes Monday, as the convention opens, when Citizens for Trump and Black on Black Crime, Inc., which has marched in the past with Black Lives Matter-affiliated protestors, are among the many groups that are set to protest.

Citizens for Trump is scheduled to hold a rally expected to attract more than a thousand people to Settler’s Landing Park, less than a mile from where Republican delegates will be gathering at the Quicken Loans Arena.

“We’ve hired special forces teams for security,” the group’s executive director, Tim Selaty, told CNN last week, declining to specify who would provide that extra security. “The Secret Service is well aware of what we’re doing and they’re going to be provided with everything they need to work in tandem with the local local law enforcement.”

“Nothing has changed because I still feel the same way, our message will still be the same,” Porter said on Sunday afternoon. “We refuse to let anybody who has a simplistic or violent or hateful message stop the type of message that we have been sending out for accountability. Our message is not to go out there and start murdering police officers.”

Black Lives Matter activist DeRay Mckesson, who is not in Cleveland, told CNN, “The movement began as a response to violence and a call to end violence. And that call remains as true today as they did yesterday and it will tomorrow.”

The Cleveland Police Department did not immediately respond to request for comment.

Convention CEO Jeff Larson said that organizers remained confident in the security measures currently in place and did not expect Kasich to take any new action.

“The open carry laws in Ohio haven’t changed recently, it’s been in effect for quite some time, they’ve had a number of big events that have taken place with open carry without any issues,” he told reporters Sunday afternoon. “They’ve been planning their security around that issue.”

The union has also reached out to Police Chief Calvin Williams, asking that officers — some of whom have been positioned alone and without vehicles — be grouped together on their patrols, especially outside of the downtown security zones

“We’re going to be doing things differently (after today’s attack),” Loomis said. “Right now, the chief of police thinks it’s a good idea to have one officer without a car standing at a post in various intersections all around the city? Thirty blocks from downtown? I had a guy last night standing out there by himself without the benefit of protection of a police car. Or partner. That is absolute insanity to me. There is no reason for that. We are going to demand that the police chief — at a minimum — make sure that we have three officers working together, watching each other’s backs.”