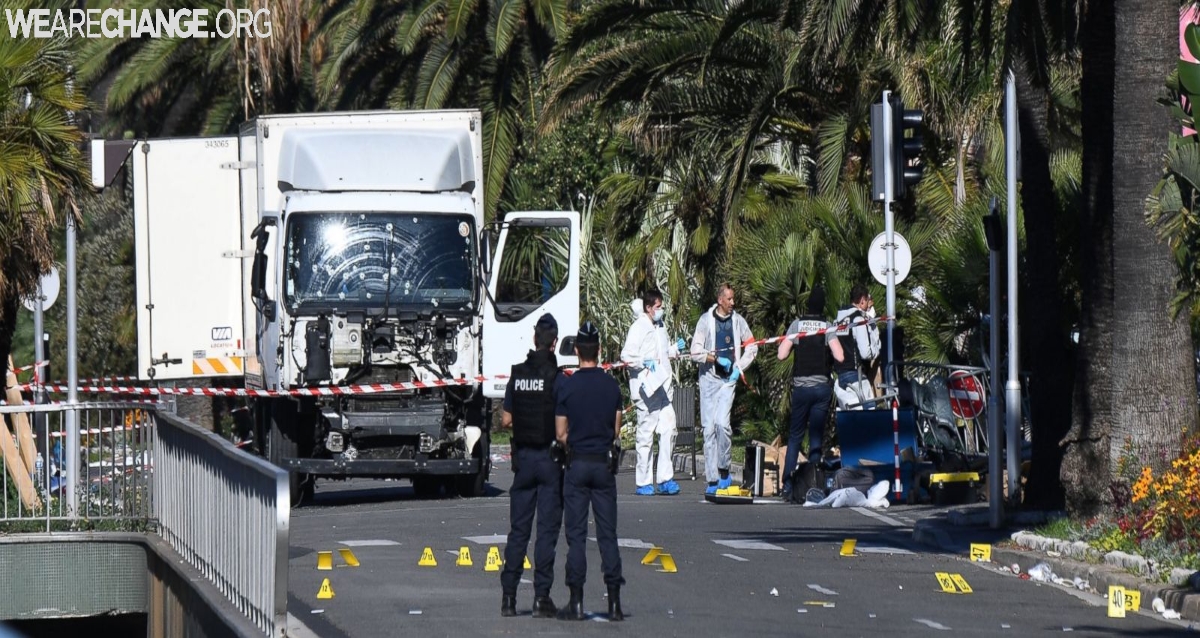 A large truck ran into a crowd on France’s independence day (July 14) in the city of Nice on the Mediterranean sea. It killed about 80 people in about a minute… and the “terrorist” was shot. The act is obviously a terrorist act that echoes recent Islamic terror events. But as in many of these other events, there are numerous facts that are hard to explain.

* According to The Telegraph, first police reports mentioned FAKE WEAPONS AND GRENADE found inside the truck, along with a couple of real guns. Why would the killer carry fake weapons?

* Mohamed Lahouaiej Bouhlelm, the guy accused of the crime, was born in Tunisia in 1985. He had both a Tunisian and a French passport. He was NOT religious at all. He loved girls and Salsa music. He was a divorced father of three, described as a good looking loner. A bit weird and a bit rude.

* He had financial problems and was not in close contact with his family in Tunisia. He had a criminal record for the past 10 years and was arrested again only a few months ago, always for small crimes such as robberies.

* According to early reports, it was premeditated… The truck was rented a couple of days before and the police were suspecting accomplices based on CCTV cameras.

* This is the interview of a witness called Richard Gutjahr. He is a German journalist who also happens to be married to israeli Knesset member Einat Wilf. He advocates Israel online in propaganda videos.

* Among the victims, a dad and his son from Texas were singled out in the medias very early. (Pure speculation: from experience studying other similar events, these two victims COULD be fake… created to move the American public.)

* An amateur video of the aftermath of the event shows a man near the truck being arrested alive on the ground and taken away… The video was first published by Ynet News – an Israeli website managed by the main Israeli daily newspaper Yediot Aharonot – early on the following day at 8:40 am Paris time.

The person who shot this video – according to Ynet – is Silvan Ben Weiss, an Israeli tourist. But Jerusalem Online describes him as an Israeli living in France.

Later on the same day (July 15) around noon, the same video was posted on YouTube via Twitter by Morsmal, a Norwegian NGO related to the UNESCO. The video had almost 1/2 million views when it was suddenly removed by YouTube alleging it was spam or misinformation. Morsmal is managed by On Elpeleg, a man originally from Tel Aviv, who promotes Israel online. His page on Linkedin describes him as an editor in chief involved in media production, also as a “Middle East Commercial Attaché for Somalia,” a teacher and a lay judge in Norway… On Twitter, Elpeleg told someone who had doubts about the video that it was shot by an Israeli tourist.

On this video – also reported by the French website Panamza – we can see policemen beating up a guy on the ground and then carrying him away harshly in an extreme hurry (running). He is obviously treated like a suspect, not like a victim. The police never gave an explanation about it to the press. The newspaper Le Monde published a poor article about the video to try to dismiss conspiracy theories.

EVEN MORE QUESTIONS FROM Annie Logical IN THE VIDEO ABOVE !

The newspaper Nice Matin might have an explanation. On July 17 they published a short article (confusing and very badly written with typos/mistakes) reporting that a 26 years old delivery guy named “Gwenaël” was with his friends on the beach. The young man said when he saw what was going on, he left his friends and courageously ran towards the truck! He said he managed to catch up with the truck when it slowed down (the truck was reported driving at more or less 40 mph). He said it was horrible as he ran over corpses (“cadavres” in French) to reach the driver. Corpses is a weird word to use at this stage, since the victims were hit only a few seconds ago and did not have the time to die… He says he managed to climb on the truck and punch the driver… who replied with gun shots… but did not get him. The report also specifies the gun was a 7.65 millimeters. How did they know that? The end of the story is confusing… “Gwanaël” says he found himself behind the stopped truck holding a knife (!?) and he says he heroically jumped on some other guy how was there to protect him from the bullets (coming from both the driver and the police). He says that right at this moment other policemen arrested him thinking he might be related to the killer.

Adding to the confusion, the report also says two other “heroes” climbed on the truck to try something and were detained and questioned by the police. They were all freed sometime later.