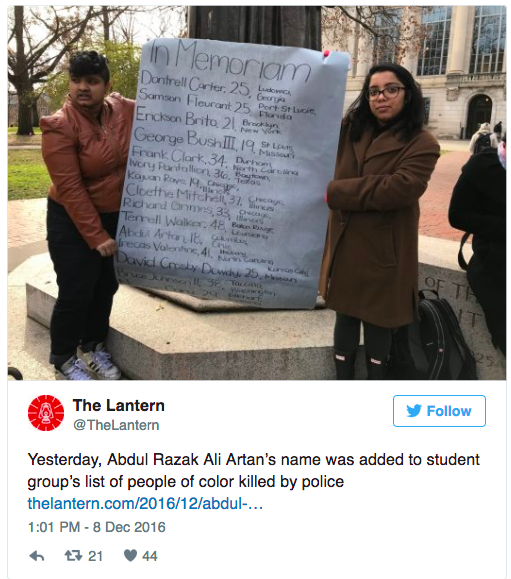 Article via The Lantern 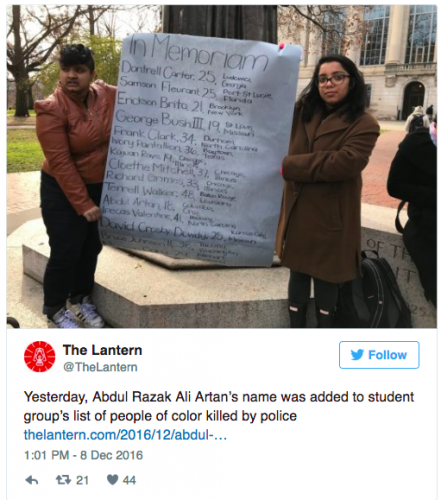 About 25 people gathered on the Oval in front of Thompson Library Wednesday afternoon to discuss last week’s attack on OSU’s campus and read the names of people of color who have been killed by police officers in the past two months. They added Abdul Razak Ali Artan, the third-year in logistics management whose attack on campus with a car and a knife resulted in his death and about a dozen people being sent to the hospital on Nov. 28.

OSU Coalition for Black Liberation, the organization that planned the event, has been reading from the list of names since October and has added names each week. On Wednesday, it wanted to address last week’s events specifically, and the fallout it had on minority communities.

“We broadened the scope of what today was supposed to be, to talk about the aftermath of what happened on the 28th — to talk about what it meant for that attack to happen and also for Ohio State to be a focal point for a lot of right-wing pundits, Islamophobia and xenophobia,” said Maryam Abidi, a fourth-year in women’s, gender and sexuality studies.

The event began with the reading of a eulogy for all those who are on the list, a reading of the individuals’ names, ages and the location of their death, followed by a moment of silence.

“In some cases, the deceased may have committed acts of violence against others before they were killed. Perhaps they were domestic abusers, perhaps they threatened or killed others. This possibility is not something to shy away from. The protest against police brutality extends to the innocent and the guilty alike, because we know that no matter the crime, justice and due process don’t come from a cop’s bullet,” Abidi said while reading the eulogy.

Among the names on the list was Artan. Those in attendance said they did not condone his actions, but some said they have compassion for the attacker, who expressed feelings of anxiety related to how he was perceived as a Muslim.

“You can understand where an act of violence comes from without condoning that act of violence,” said Pranav Jani, an associate professor of English.

“Even compassion has been politicized, as we saw with the diversity officer who’s being attacked for daring to say let’s show compassion towards a fellow Buckeye who made tragic, tragic mistakes,” Jani said.

Some found Clemons Thompson’s post to be over the line. It read:

“Abudl Razak Ali Artan was a BUCKEYE, a member of our family. If you think it is ok to celebrate his death and/or share pictures of his dead body and I see it in my timeline, I will unfriend you. I pray you find compassion for his life, as troubled as it clearly was. Think of the pain he must have been in to feel that his actions were the only solution. We must come together in this time of tragedy. #BuckeyeStrong #BlackLivesMatter #SayHisName”

The group also addressed president-elect Donald Trump’s scheduled visit to campus on Thursday afternoon, in which  he plans to speak with the victims of last week’s attack, as well as police and paramedics who were first on the scene.

“It’s not us politicizing it. We’d rather him not come, and have some peace on this campus, but we’re standing up because we’re not going to let him just trample in and use this moment of tragedy as PR,” Jani said.

At the close of the event, those in attendance were also encouraged to attend a rally against Trump during his scheduled visit to the Schottenstein Center, as he holds the private meetings. The rally is organized by the International Socialist Organization.