Guccifer 2.0 Admits Seth Rich Was The Source Of DNC Files 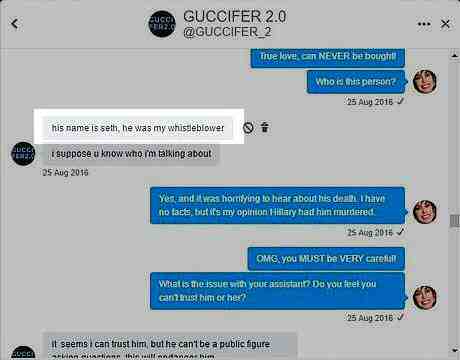 Direct Messages from U.S. alleged Russian spy @GUCCIFER_2 to actress-model @robbin_young (according to the latter) https://t.co/uMsB9WgxRQ

In the screenshot of the texts, an exchange by Guccifer and Young takes place the discussion leads to the DNC leaker. Guccifer then confesses the leaker was “Seth.”

Guccifer 2.0: his name is seth.he was my whistleblower
I suppose you know who I’m talking about

Robin Young: Yes, and it was horrifying to hear abut his death. I have no facts, but my opinion is Hillary had him murdered.

In November Julian Assange categorically said Russia did not hack into the DNC servers.

This may explain why the DNC refused to allow the FBI to look at its servers.

On July 8, 2016, 27-year-old DNC Data Director Seth Conrad Rich was murdered in Washington DC. The killer or killers took nothing from their victim, leaving behind his wallet, watch and phone leaving many to believe it was a hit job for the information he knew.

[RELATED: Surveillance Camera May Have Captured the Murder of DNC Staffer Seth Rich]

Shortly after rich’s killing, users on Reddit and social media users were pursuing a “lead” saying that Rich was en route to the FBI the morning of his murder, apparently intending to speak to special agents about an “ongoing court case” possibly involving the Clinton family The GatewayPundit reported.

So who had Seth Rich murdered? As we previously investigated it’s probably the same person who had candidate Bernie Sanders staffer’s apartments broken into and subsequently Sanders office shot at in Nevada. The same state where now President Trump was also threatened twice. But now who could that be?

The answer seems blatantly evident as there was only one other candidate with significant pull in the 2016 race that didn’t have threats against them. Although, the Clintons are innocent until proven guilty and a screenshot is inadmissible in a court of law alone. Just follow the dead body count of people the Clintons allegedly killed even Stratfor employees know the Clintons have had people murdered according to Wikileaks Global Intelligence email. Further, while they are at it the Clintons can answer for their constant obstruction of justice losing documents in various past Clinton investigations.

“I thought Vince Foster was the only person the Clinton’s had killed. How naive I was,” a Stratfor employee writes in an email.

[RELATED: Not An April Fools We Need To Talk About Nevada Feel The Bern]

[RELATED: Security Scare at Nevada Trump Rally: What You Need To Know]

With fresh evidence in the Rich case, the Democratic party is now a primary suspect in the probe of who killed Seth Rich. Those in the FBI, NSA, and CIA likely know who really had Seth Rich killed but will they talk? The FBI has a fueled hatred for Clinton it was once called “Trumpland” during the 2016 election. This new evidence by Wikileaks brings us to the next pertinent question who was Guccifer 2.0 will this individual emerge again? We are left with more questions than answers but we are one step closer to solving the mystery of who killed Seth Rich.

Stay tuned to We Are Change where we will stay on top of this and more as the story develops.