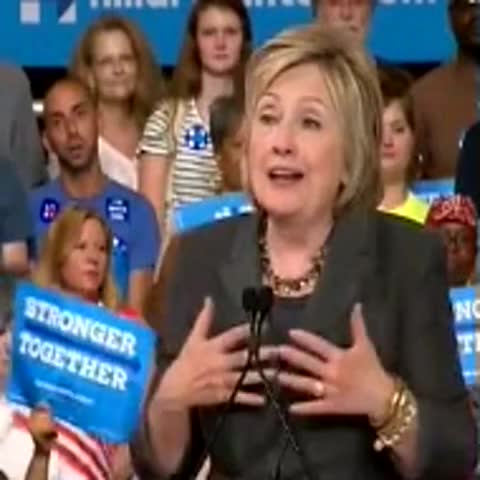 On Wednesday night, Hillary Clinton had a Howard Dean “BYAAAAH”-level cringeworthy moment during her speech in Raleigh, North Carolina.

Hillary showed she isn’t just scripted — she is a lousy actress as well.  During her speech, Hillary mistakenly read the word “sigh” in her speech, instead of showing the human emotion of exasperation and actually sighing.

In all areas, Hillary’s a mess right now — failing to actually answer specfic attacks by Donald Trump, and facing more embarrassment from Guccifer 2.0 and Guccifer 3.0, hackers that have infiltrated her Clinton  Foundation servers as well as the Democratic National Committee’s servers — exposing her corruption.

Already, Clinton’s greed has been revealed with a leak showing she demanded $225,000 per speech as a standard speaking fee, contradicting her lie that “It’s what they offered.”

She ignored reporters yesterday after Donald Trump absolutely destroyed her, calling her a “World Class Liar” and accusing her of money laundering to Bill while at the State Department. Trump provided examples of the Clintons taking bribes in shady deals with various countries who are known to be human rights violators that punish gay and lesbian men and women. Saudi Arabia has previously admitted they are funding more then 20% of Hillary’s Campaign.

This wasn’t the first time that Hillary has rudely ignored reporters. On March, 1st, 2016 she did the same-thing. She seems scared to talk to the press as its been 200 days since she has held a press conference.  It seems the stress is getting to Hillary Clinton — will she end up indicted? It seems inevitable as we have previously written, as too many people are against her.