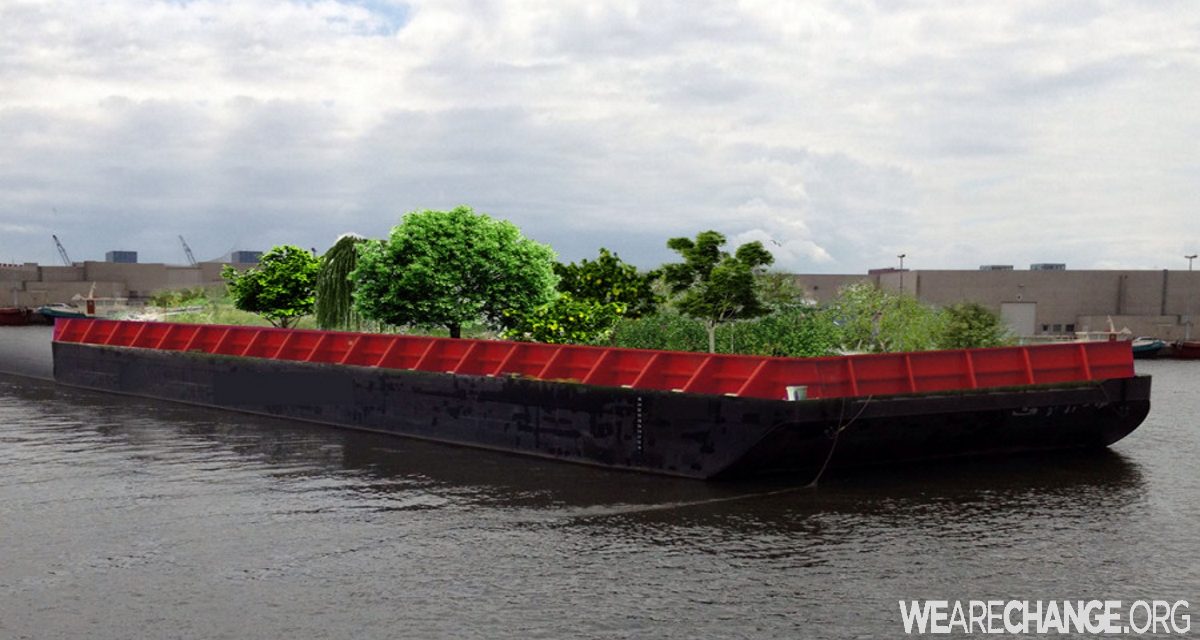 New York City banned growing food in public places… so some innovative humans came up with this idea. 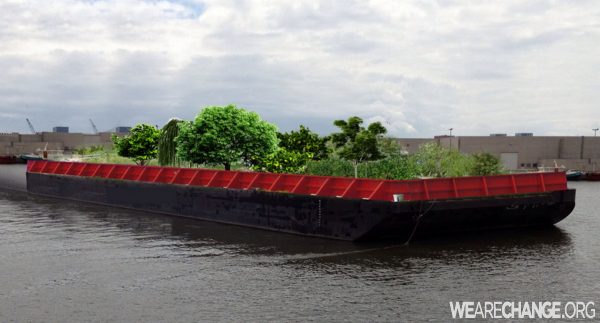 Food produced on Swale will be free to the public.

New York City residents will soon see a new vessel traveling along the Hudson River. Instead of the typical sightseeing boat populated by tourists snapping shots of the Statue of Liberty, this watercraft will be filled with a growing garden of edible plants.

That garden is Swale, a food forest that sits atop a 120-by-35-foot barge. All of the food grown on Swale will be free and available to anyone who wants to hop on board. Patrons will be able to forage for dozens of perennial plants, such as persimmons, Swiss chard, strawberries, and asparagus.

“We are working toward more edible public places in the city, with the bigger goal of revaluing healthy food as not only an expensive commodity but also a basic human right,” Mary Mattingly, the founder of Swale, wrote in an email to TakePart.

Communities have developed land-based food forests across the country—from Seattle to Philadelphia to Hawaii. But growing food for consumption on public land is prohibited in New York City, which is part of the reason why Swale is a water project.

Mattingly collaborated with several artists to create the floating sustainable environment, from designing microclimates in the forest to protect shade-loving plants from the elements to selecting low-maintenance perennials that will grow stronger each year.

When Swale launches at the end of June, it will travel along the river, stopping to serve various New York communities. So far, Mattingly has secured four docking locations: Neptune Park in New Rochelle, Concrete Plant Park in the Bronx, Yankee Pier on Governors Island, and Brooklyn Bridge Park Pier 6.

“First and foremost, [Swale is for] people who need it, and who have less access to fresh food,” Mattingly wrote. “But it is also geared toward people who want to work toward change and will be inspired by it.”

The project is in its initial stages, so it’s hard to say just how much food will be produced or the number of people it will feed. According to Mattingly, food forests of a similar size can produce about 5,000 pounds of food in six months.

While Swale will serve the community as a free food service, it will also be an artistic space. Biome Arts, a collective of artists and ecologists, is hosting its EcoSummit 2016 aboard Swale in the summer, with plans to build an installation, host performances, and offer free skill-sharing workshops.

“[Art] can provide a space to interrogate predatory economics and the violence inherent in types of consumption while co-creating an alternative,” Mattingly wrote. She considers Swale a proposal for a public system for free food, and she hopes that people who use it will be inspired to challenge New York City policy and work to develop land-based food forests across the city.

“I believe it is necessary to create spaces that are more interdependent throughout the city, spaces that can better provide for all of the needs people have in a city,” Mattingly wrote. “I hope Swale allows us to rethink ideals around commodities, value, and the commons.”