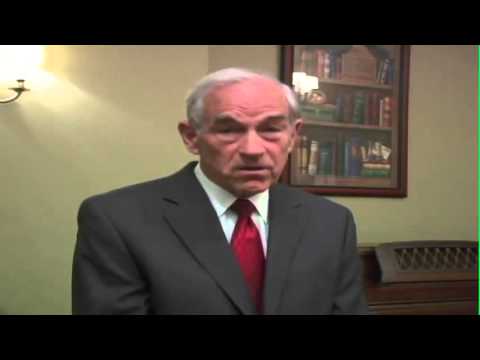 After working with Bernie Sanders for months on the Audit the Fed Bill, Bernie Sanders switched it at the last minute! Dr. Paul states he was so disappointed in Sanders and what he did could actually make things worse.

Ron Paul regarding the Senate Audit the Fed bill:

Bernie Sanders has sold out and sided with Chris Dodd to gut Audit the Fed in the Senate. His “compromise” is what the administration and banking interests want: they’ll allow the TARP and TALF to be audited, but no transparency of the FOMC, discount window operations or agreement with foreign central banks. We need to take action and stop this!…

I am outraged. The Senate just voted down the Vitter Amendment and against a real audit of the Federal Reserve. My entire team and I are going to work very hard to make sure the American people know who voted right, and who voted with the banking special interests.

The Senate has passed what is being called the Audit the Fed bill with overwhelming support (96-0).

Up until about last Thursday (coincidence?) there was a possibility through the Vitter amendment (see below) that the Audit the Fed bill in the Senate was going to actually audit Fed monetary policy and discount window transactions as per the House of Representative’s bill (HR1207) which passed with significant support last year. The new bill, which was passed in the Senate, was changed by Senator Sanders at the very last minute, according to Ron Paul. Additionally, any hope of the Vitter amendment being passed seems to have been wiped out by Thursday’s stock market crash, which we have suggested was an attack on our financial system and a clear message to Congress by parties interested in keeping Fed activities secret.

A compromise amendment requiring the GAO to conduct a one-time audit of the Federal Reserve’s emergency-response programs unanimously passed the Senate by a 96-0 vote. The amendment had been introduced by Sen. Bernie Sanders (I-Vt.) and calls for for releasing the names of institutions that received in total more than $2 trillion in loans from the central bank during the peak of the financial crisis.

Sanders had originally used the language of Ron Paul’s HR 1207, which passed in the House as an amendment last year, but later changed his amendment under pressure by the Federal Reserve and the Obama administration. Sen. Vitter reintroduced an amendment with the original Audit the Fed language.

Basically, the Fed will now give us the names of the banks they lent to and tell us how much money they spent on office supplies, but no real information will likely be shared with the public. This is 21st century government transparency.

David Vitter, Republican of Louisiana, attempted to keep Ron Paul’s original language in the bill, but for some unknown reason (ahem…), the Senate rejected this amendment 37-62.

Senator David Vitter, Republican of Louisiana, put forward an amendment that would have mirrored Ron Paul’s tough Audit the Fed language, but the Senate rejected it today. The vote was 37 to 62. (The Senate instead passed a modified “placebo” amendment that had the support of the Obama administration.)

Before the vote, Vitter appealed for support: “I urge all of my colleagues, Democrats and Republicans, to support both amendments to have full openness and accountability and transparency with all the protections that are included against politicizing individual Fed decisions.”

Every Senator, Republican and Democrat, who voted against this amendment needs to be sent home in the next election cycle. With this vote, they have essentially told the American people that we don’t need to know how the Federal Reserve engages in lending, what assets they have on their books and what they have been doing with the US dollar.

The Federal Reserve’s decisions affect every single American, including those who have yet to be born. The issue of transparency shouldn’t even be an issue! This is common sense, is it not? We do not need “one time disclosures” as per the Senate bill. We need constant transparency. Does anyone really trust the Fed, Treasury and other to do the American people right if there is no cross-check?

This is getting more ridiculous by the day.