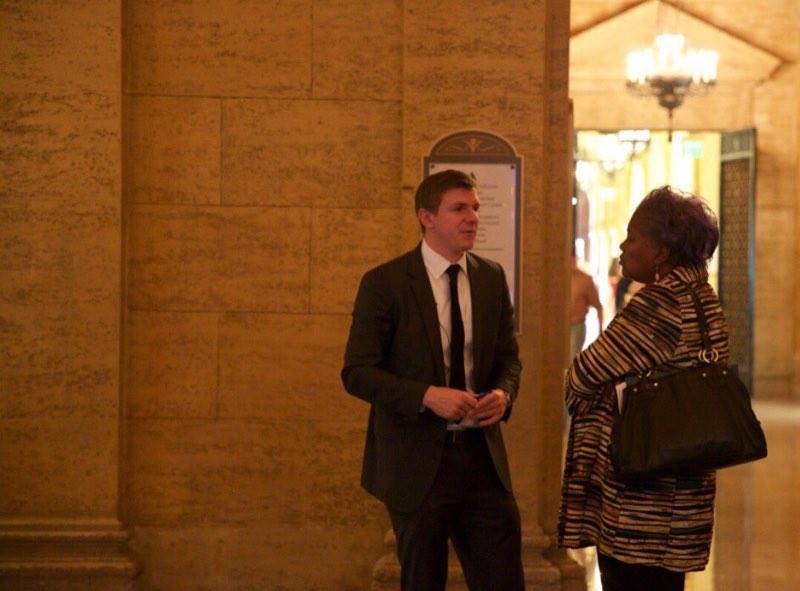 Democratic National Committee interim chair Donna Brazile appeared very paranoid that conservative activist and journalist James O’Keefe  had “bugged” her and the DNC when she was confronted by O’Keefe at David Horowitz’s Restoration Weekend.

Brazile tweeted that she confronted Project Veritas founder O’Keefe at David Horowitz’s Restoration Weekend, a conference featuring Milo Yiannopoulus and Trump campaign CEO Steve Bannon as well as several other notable people. Although sources tell me that it was the opposite way around, and that James O’Keefe confronted Brazile who was “very hesitant to talk to him with her extravagant blue hair.” She even ran from him according to event sources.

Yeah, we are everywhere Donna. Brazile appeared paranoid that she was being bugged, even asking O’Keefe “are you bugging the DNC?” She also asked if O’Keefe was video recording the current conversation or tape recording the conversation. No, but who needs a tape recorder when you have a spy? This is what our source had to say.

“I saw her in the lobby and a liberal with a backpack was crying on her shoulder about Hillary losing.

And Donna said “let me give you another hug” because the woman was hysterically crying about Hillary losing.”

It’s safe to assume Donna that if you don’t want to be famous for all the wrong reasons don’t be corrupt, don’t do things in the dark that you wouldn’t do in the spotlight.

What's on your menu? Just ran into James O'Keefe in Florida at a conference hosted by David Horowitz. We live in interesting times.

Asked O'Keefe if he bugged the DNC. His answer: No. asked if he was filming or tape recording my questions? Answer No. We parted company.

After the story broke in October, Brazile denied that the criminal actions ever took place and dismissed O’Keefe as a “convicted criminal with a history of doctoring views to advance his ideological agenda.”

Brazile was fired from CNN last month after emails posted by WikiLeaks revealed she had offered the Clinton campaign a “heads up” on several debate questions from one of the network’s sponsored primary debates. She was made DNC interim chair this summer after an earlier batch of hacked emails from Wikileaks revealed that her predecessor Rep. Debbie Wasserman Schultz, failed to do her job ethically and fairly and rigging the primary against candidate Bernie Sanders in favor of Clinton. Which ultimately cost the Democrats the election.

O’Keefe also exposed dirty tricks used by operatives of the DNC and outright racism. In one video O’Keefe exposed that Democrats were busing people in for 50 years according to Deputy political director at People For The American Way, Scott Foval. PV journalists also exposed the abhorrent racism behind a Hillary Clinton major donor Benjamin Barber, who said that “Blacks were seriously f*cked in the head for helping the other side.”

Additionally a Project Veritas journalist exposed the day before the election that it was possible without any identification asked to get Huma Abedin’s ballot in NYC wearing a full burka. Then on election day O’Keefe revealed the Unholy pastors trying to rig the election by busing people in and trailed a bus in Philadelphia that he suspected were busing people from polling place to polling place.