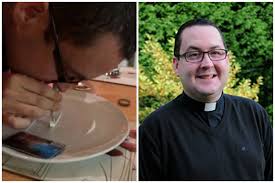 A Roman Catholic priest has been filmed snorting a large line of cocaine at his home on church grounds which was reportedly filled with Nazi memorabilia.

Father Stephen Crossan, 37, admitted to The Sun on Sunday newspaper that he didn’t have an ‘issue with drugs’ and the incident came after a two day bender.

The video was filmed at the priest’s home on the grounds of St Patrick’s Church in Banbridge, Northern Ireland.

” I do not have an issue with drugs.”

Revellers who attended the after party were reportedly not just shocked to see the priest taking drugs but also that his home was filled with Nazi memorabilia including flags, hats and an eagle with a swastika on a plinth on his mantelpiece, reports The Sun on Sunday.

Father Crossan, who has worked as a prison chaplain, told the paper: “I’m no Nazi. I collect historical stuff.”

He said he was on sick leave when the footage was filmed and was off with depression.

He has apparently left the church but a parish spokesman said Father Crossan was being supported with his issues.

According to the church’s website Father Crossan studied for the priesthood at St Patrick’s College Maynooth, and completed a degree in theology in 2007.