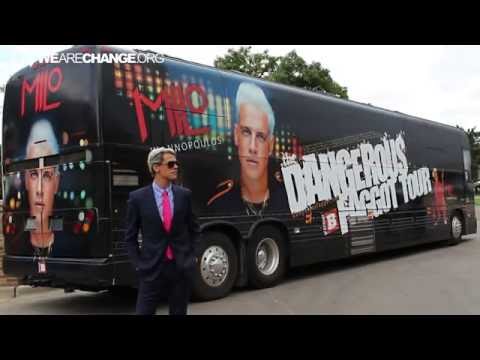 In a Facebook Live video this afternoon, Milo Yiannopoulos denied allegations that he supports pedophilia, explaining that the mainstream media took his words out of context.

In a round of negative press following Milo’s attention-grabbing appearance on HBO’s Real Time with Bill Maher and the huge announcement that Milo would give a keynote speech at the major conservative conference CPAC, the mainstream media spun Milo’s words from an old interview to make it seem like he was an advocate for pedophilia.

Yiannopoulos questioned age-of-consent laws and suggested that minors as young as 13 were “sexually mature” enough for relations with adults. In it, Yiannopoulos said:

This is a must watch!

Here is a longer cut where Milo Yiannopoulos says that he "is advocating" for legal sex between 13 year olds! & older men. #CPAC2017 pic.twitter.com/1fiuv7TSKs

Later Sunday afternoon, Yiannopoulos took to Facebook to voice his disdain for the video making the rounds on social media as well as to defend himself.

The video that came out against Milo was edited to include a section where Milo said that “consent was arbitrary and oppressive” but those words according to Milo were taken from a speech on arbitrary consent on college campuses, not advocating for sex among thirteen-year-olds, as the mainstream media spun it. The clips were spliced together to make it look like Milo was saying that consent for thirteen-year-olds was arbitrary and oppressive and “That wasn’t the case,” Milo said.

The next part of the video was taken from a speech where Milo used the word “boys” to describe a gay relationship.

Milo added he was “speaking about his own personal experience when he was 17 years old and his boyfriend was 29 years old,” and talking about gay consenting adult males having younger boyfriends.

He also said that he helped expose three pedophiles: Nicholas Nyberg, Luke Bosiah, and Chris Laden, and noted that he spoke out against well-known BBC pedophile Jimmy Savile before the scandal broke.

This type of mainstream media character assassination and defamation isn’t new or unique by any means. Just last week, the Wall Street Journal defamed Youtube star PewDiePie and portrayed him as a Nazi, taking a clip of him raising his hand and using it to claim he is anti-Semitic.

We Are Change interviewed Milo Yiannopoulos in September of last year during his “Dangerous Faggot Tour,” and Milo had some very provocative things to say about Hillary Clinton – a candidate whose campaign the mainstream media was caught colluding with in leaked emailed released by Wikileaks.

Ironically, many of the same outlets accusing Milo of being a pedophile sympathizer have actually covered up the well-documented pedophile rings in Hollywood, London, Washington D.C., and other elite circles.

Interesting that the media chose to attack Milo as a “pedophile sympathizer.” As Nazi propaganda minister Joseph Goebbels said, “Accuse your enemy of that which you are guilty.”

Following the election of Donald Trump, dozens of pedophiles have been arrested across the country, begging the question – who was protecting these pedophiles before Trump’s election?

UPDATE: Simon & Schuster has pulled Milo’s book deal. His book “Dangerous” had already reached #1 on all of Amazon.com.

Breitbart editors and writers are allegedly threatening to quit if Milo isn’t fired according to a source who spoke with Washingontonian.

“The fact of the matter is that there’s been so many things that have been objectionable about Milo over the last couple of years, quite frankly. This is something far more sinister,” the senior editor says. “If the company isn’t willing to act, there are at least half a dozen people who are willing to walk out over it.”

“Talking abut young boys and somehow seeking to ameliorate concerns over young boys’ relationships with older men…I’m pretty sure everyone in the company would vomit upon hearing these words,” the source continues. “What right-thinking person doesn’t feel sick to their stomach when hearing something like that?”

Milo’s printed response to the current controversy is here.

Let us know what you think of this story in the comment section below is Milo a pedophile supporter or is the media twisting his words?

We Are Change Editor-At-Large Andrew Meyer contributed to this report.