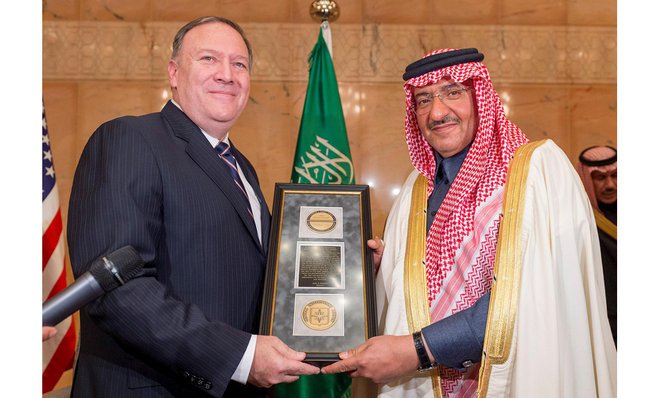 The United States has given a medal to a major terrorist state… for its efforts to fight terrorism. Newly appointed CIA Director Micheal Pompeo awarded Saudi Crown Prince Mohammed bin Nayef with the prestigious “George Tenet Medal” on Friday, for his “work in the fight against terrorism.”

This all comes as President Trump is reportedly preparing to go forward with a multi-billion dollar weapons deal with the Saudi kingdom. However, he seems to be forgetting a few things…

Included in the trove of emails leaked by WikiLeaks from the account of Clinton campaign chairman John Podesta was a message from the former Democratic nominee that gave insight into Saudi Arabia’s relationship with the Islamic State:

“While this military/para-military operation is moving forward, we need to use our diplomatic and more traditional intelligence assets to bring pressure on the governments of Qatar and Saudi Arabia, which are providing clandestine financial and logistic support to ISIL and other radical Sunni groups in the region,” Hillary Clinton wrote.

The U.S. has also been a faithful supporter of Saudi Arabia’s proxy war in Yemen for the last two years. Last month, the death toll from the war surpassed 10,000, with an additional 40,000 injured and at least 10 million in need “urgent assistance.”

Saudi Arabia publicly executed 150 people in 2016, which included the largest mass execution since 1980. At least one-third of the people who were executed were tried in the kingdom’s “specialized criminal court,” which has a reputation for being used to “silence political dissidents.”‘

Then there is the fact that 15 out of the 19 hijackers implicated in the 9/11 terrorist attacks were from… Saudi Arabia. However, nearly 16 years later, the United States is giving the same country a medal for its efforts to fight terrorism?

One of the most important things to remember about this story is that President Trump’s administration is doing exactly what President Obama’s administration did—cuddling up to Saudi Arabia, ignoring the country’s blatant human rights violations and giving it awards for “fighting terrorism,” when it is helping to create it.