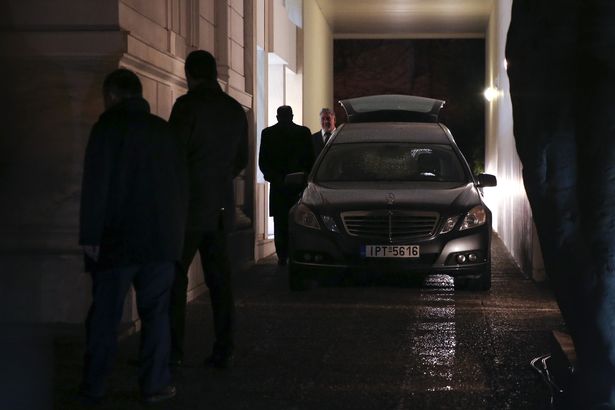 Russian diplomat Andrey Malanin, 54, was discovered dead on the floor in the bedroom in his Athens apartment last night, Greek police confirmed.

The senior Russian diplomat was found dead by embassy staff.

This marks what seems like a pattern of four strange deaths in a month’s time, as
Malanin’s death follows the assassination of Russia’s ambassador to Turkey, Andrey Karlov, the death of another Russian diplomat, Russian Foreign Minister Peter Polshikov, found dead in his apartment shot in the head, and the death of Yves Chandelon, Chief Auditor of NATO in charge of counterterrorism funding, shot dead in the head in his car.

Police do not suspect any foul play in this case, and a police spokesperson said the body had no visible injuries and there had been no obvious break-in.

“At first sight, we are talking about natural causes,” he, said.

Police further added that a coroner will examine the body, while homicide officers will also investigate the death.

It’s worth noting that governments, specifically the CIA, have for long periods of time had chemical concoctions that can induce full systematic shutdown of a person’s nervous system.

Former CIA employee Mary Embree discusses the infamous heart attack gun and how she was tasked with finding a chemical condition that would cause a heart attack. The weapon was first made public during the Church Committee hearings in 1975 by former CIA director William Colby. Very lethal and untraceable, by using this weapon a murder is made to look natural while the poison dissolves in hours.

It is highly unlikely the CIA commissioned this weapon with no intention to use it, and in all likelihood the CIA has been using this weapon and created more advanced versions of it since the 1970’s. With that said, other intelligence agencies and state actors would also likely have this type of chemical warfare by now.

A few examples of such known poisons are –

Death Camas is a rather pretty blue wild-flower that breaks down very quickly and probably doesn’t come up in a lot of toxicology test.

Succinylcholine or SUX for short, is a neuromuscular paralytic drug which is almost untraceable unless you know what you are looking for. It paralyzes all the muscles of the body, including those used for breathing due to which the person dies from asphyxia.

Botulinum toxin is a very powerful nerve agent. In small quantities, it’s used in anti-aging treatments, better known as “botox”. It’s commonly used in food poisoning, a fairly nasty form of food poisoning caused by eating contaminated food. The botox itself is destroyed by heat, but the spores that *produce* the botox are not making it a great way to kill someone almost undetected.

Tetrodotoxin is found in certain parts of the pufferfish.

Saxitoxin is a chemical weapon that was researched by the CIA in the 1960s. It’s produced by particular algae, and can accumulate in shellfish, as they’re filter feeders and consume algae ingestion can result in paralysis and respiratory failure.

These are just a few examples known to the public of less commonly checked-for poisons by coroners. Bear in mind, intelligence agencies may possess other unknown advanced weaponry.

Let us know in the comment section below what you think about this recent death of another Russian official. Are we witnessing multiple covert assassinations as retaliation for Russia’s opposition to the U.S. military industrial complex?