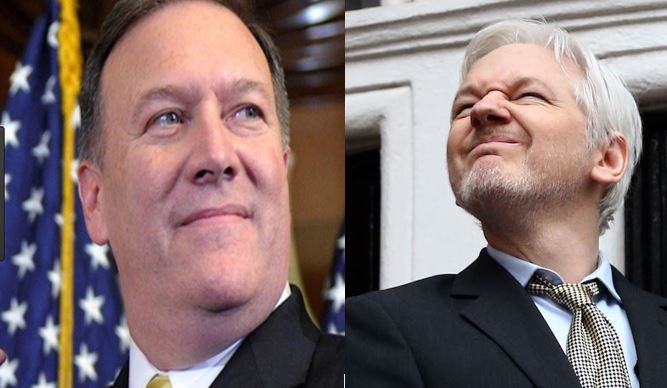 After WikiLeaks had been labeled a non-state hostile agency by CIA director Mike Pompeo, WikiLeaks mogul Julian Assange recently sat down with the Intercept for an interview lasting just under an hour to discuss the latest developments with the intelligence war being waged against WikiLeaks.

When asked what his response to the allegations that WikiLeaks received their recent leaks from Russian sources in an effort to assure the election of Donald Trump, Assange said that:

“If you read the wording carefully, that’s not the dominant narrative, that’s never said in anything that’s fact-checked, because… WikiLeaks is no different than the U.S. media.”

Assange asserted that three figures, James Clapper, James Comey, and Barack Obama (in his last press conference) had all three confirmed that WikiLeaks operates in a similar manner to the U.S. media in separate testimonies. Furthermore, Assange made a point to illustrate that WikiLeaks wasn’t the only source that published classified information during the election. According to Assange:

“The allegation in relation to us is that, which once again we don’t agree with, but that Russian hackers of some kind gave information to various State parties or approved of by the State, and it eventually came to us. So, there’s an acceptance by the officials in the U.S. Obama administration that WikiLeaks was not engaging directly with the Russian government at all, but other U.S. media organizations were directly engaging with the Russians.”

During his last press conference, President Obama noted that “the conclusions of the intelligence community with respect to the Russian hacking were not conclusive as to whether WikiLeaks was witting or not in being the conduit through which we heard about the DNC e-mails that were leaked. I don’t pay a lot of attention to Mr. Assange’s tweets, so that wasn’t a consideration in this instance.”

According to Obama then, Assange is not conclusively working with Russian intelligence and that they weren’t knowingly being the platform to the alleged method of hacking he knew the leaks were brought about. Either the intelligence community’s investigation has come up with new developments, or there is no direct evidence that there was any sort of Russian involvement in the DNC hacks.

Assange later brought up Pompeo’s recent speech where the CIA director claimed that WikiLeaks was collaborating with Russians, saying specifically that:

“You look at what Pompeo, the current director of the CIA stated, he said that Wikileaks is a ‘publisher,’ or I can’t remember exactly what word he used, that was ‘abetted’ by other state intelligence agencies, including Russia.”

As immediately noted by the reporter, what Assange is referencing here is this quote from Mike Pompeo’s recent speech at the intelligence agency in relation to WikiLeaks:

“It is time to call out WikiLeaks for what it really is: a non-state hostile intelligence service often abetted by state actors like Russia.”

Assange had an interesting, and humorous response back to Intercept about what he thought about this assertion by CIA director Pompeo, and specifically the phrase “non-state hostile intelligence service:”

Assange then elaborated further on whether or not he thought WikiLeaks is an intelligence service, both shortly by saying “yes and no,” and then elaborating further:

“Intelligence services are in the business of developing sources, obtaining information that is not already public, analyzing it, verifying it, writing some of that up, making it accessible, and then what do they do with it? They don’t publish it. The publishers? What do they do with the information? They publish it. So, the difference between a serious news organization that covers national security, or an investigative publisher, like WikiLeaks or the Intercept, or… is the end product is publishing.”

When being referenced with more narrative from Pompeo’s speech that was critical of WikiLeaks, Assange noted his theory as to why Pompeo was making charged statements in the first place:

“the reason why Pompeo is launching this attack is because he understands we’re under serious exposing all sorts of illegal actions by the CIA, so he’s trying to get ahead of the publicity curve and create a preemptive defense.”

Assange stated what he believed the CIA’s interest in the scenario was at the latter part of the interview, stating that:

“The CIA is only in the business of collecting information, kidnapping people, and assassinating people.”

Assange furthermore noted in the interview that the source of his publications during the election was not any sort of government agency, specifically saying: “I am confident, in what we have already stated, that our source is not part of a government,” concluding that he wouldn’t directly reveal who his source(s) came from. However, he remained confident that the content of the leaks is reliable, accurate, and legitimate.

[RELATED: What You Need To Know About The Vault 7 WikiLeaks Release]

The reporter later asked if WikiLeaks ever possessed any hacked e-mails from the RNC that they did not publish, and Assange quickly said “no.” Assange was then questioned why he didn’t release any documents illustrating RNC corruption

Assange asserted that evidence of corruption from either party, Democratic or Republican, only comes along once every few years, making it difficult to balance reports of DNC corruption with consistent RNC reports of corruption.

During the interview, Assange was concerned that CIA director Pompeo was trying to modify the meaning of the first amendment to attack organizations like WikiLeaks, perhaps referencing this quote from Pompeo’s speech:

“No, Julian Assange and his kind are not the slightest bit interested in improving civil liberties or enhancing personal freedom. They have pretended that America’s First Amendment freedoms shield them from justice. They may have believed that, but they are wrong”

Assange responded to any claim that WikiLeaks has no first amendment rights by saying:

Assange does make an interesting point. There is no legal requirement in the Constitution that specifically states that publishers like WikiLeaks are not allowed to publish classified information. Furthermore, there is no requirement in the Constitution that asserts that national security and the overall security of U.S. citizens, in general, is more important than the free speech rights and the work of a publishing organization. These are interpretations which need to be discussed more in a proper legal setting.

Assange Says Many People Live In a ‘Particular Information Sphere:’

Assange furthermore argued that people’s personal circumstance and beliefs explain a lot about their actions and that people like Trump and Hannity shouldn’t be shunned for who they are, asserting that:

“Of course, there’s groupism operating, and of course opportunism as well, but I don’t think you can cast these people as devils at all. These are people with a range of noble and ignoble character traits that are human beings, and they have a worldview… they exist within a particular information sphere, which I find fairly confining and self-referential.”

Assange On The Recent Syrian Airstrikes

Assange floated around an idea on the intentions behind the Trump administration’s recent military actions, by mentioning that:

“The Russian narrative has politically confined the administration in relation to… anything… ultimately in my view, the declining popularity coming out of a variety of things, but including the eating away at Trump by the Russian narrative that has caused him to look for distractions, and those distractions include throwing missiles at people.”

For Assange’s final question with the Intercept, he was asked whether or not he wanted Hillary Clinton to fail at winning the Presidency during the election campaign. Assange immediately labeled this question as “psycho-babble” before elaborating on his stance in more detail:

“I’ve never met Hillary Clinton. I think I would probably like her in person, most good politicians are quite charismatic in person. In some ways, she’s a bit like me: she’s a bit [inaudible: punkish?], and a bit awkward. So, maybe we’d get along… Did we pursue collecting documents about Hillary Clinton because of some kind of vendetta? Or, because we perceived that was where the center of power was heading in the United States, and a lot of people were very interested in where the center of power was heading?… We thought Hillary Clinton was going to win, we thought that our publications were actually going to create a very infuriated Hillary Clinton on the other end that we would have to deal with. So it’s… far from that publishing cycle being one of self-interest, it was one of, as far as we foresaw it, one of self-sacrifice because we were infuriating what everyone perceived would be the next executive.”

This interview comes after the U.S. has begun preparing charges against Assange by the U.S. government. Due to these charges, we should expect to hear more from Assange soon in the future.

To listen to Assange’s interview in its entirety, click here to go the podcast from Intercept and confirm the facts of this story for yourself.